Moeen had worn wristbands in support of Gaza. ECB says he has not committed any offence.

The England and Wales Cricket Board (ECB) came out in support of Moeen Ali for wearing wristbands reading ‘Free Palestine’, ‘Save Gaza’. An ECB official said that Moeen has not committed any offence.

“The ECB don’t believe he has committed any offence,” an ECB official was quoted as saying by The Guardian. The ICC’s Code of Conduct does not allow the players to display any logos other than their bats and approved commercial backers. They are banned from displaying political, religious and racial activities or causes.

Here are some instances of players who made political statements on the field. Zimbabwe players Andy Flower and Henry Olanga had worn black armbands to send a message for protection of human rights in Zimbabwe. Viv Richards had worn the Rastafarian band. Moeen Ali wears ‘Save Gaza’ band: Instances where cricketers made political statements on the field 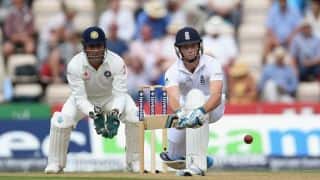