Craig Overton has been selected for this winter's England Performance Programme.

London: An anti-racism campaigner has called on the England and Wales Cricket Board to get tougher on abuse after Somerset bowler Craig Overton was only given a two-match ban for allegedly telling a Pakistan-born opponent to “go back to your own f***ing country”. Overton was found guilty of a level-one breach, the lowest of four ECB directives, for comments he was heard making to Sussex spinner Ashar Zaidi in an English County Championship match at Hove in September. Both umpire Alex Wharf and Sussex’s non-striking batsman Michael Yardy said they heard Overton’s abuse of the 34-year-old. ALSO READ: ECB files petition against Danish Kaneria for spot-fixing case

It was reported that Wharf included this in his report, with Yardy giving a written statement in support. Zaidi, who was playing for Sussex on his British passport before being released by the club at the end of the season, told the match officials he had not heard anything beyond the “usual” comments that did not upset him. Overton denied saying the words, but Kick It Out chairman Lord Herman Ouseley believes the punishment by the Cricket Discipline Commission (CDC), an independent arm of the ECB, does not fit the offence.

“My personal view would be that it seems quite outrageous; that the punishment does not fit the offence. It’s not only serious abuse and misconduct, it is clearly racially offensive,” he told the Guardian. “I would expect that if it was in football, that person would be getting a very heavy sanction. If cricket wants to maintain a reputation of credibility it should nip something like this in the bud and make it clear that it is not going to tolerate it. ALSO READ: Danish Kaneria challenges ECB’s petition in Sindh High Court

“If a decision seems quite outrageously wrong, then the ECB could appeal and that goes to another panel. In appealing, and voicing its displeasure at the verdict, it can send the message that there should be zero tolerance of such discriminatory conduct,” told Ouseley.

An ECB spokesman earlier insisted that it remains content with the CDC’s handling of the case, and Overton was subsequently selected for this winter’s England Performance Programme. “The Cricket Discipline Commission is an independent body which operates at arm’s length from the ECB,” the ECB spokesman said. “Craig Overton’s selection for the EPP squad would have played no part whatsoever in the CDC’s ruling in this matter.”

“The ECB refutes any suggestion of interference or bias in the proper disciplinary process,” concluded ECB spokesman. 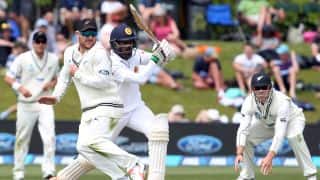