The England and Wales Cricket Board (ECB) has got into a new partnership with Chance to Shine Charity and will double its investment in primary schools.

The England and Wales Cricket Board (ECB) has got into a new partnership with Chance to Shine Charity and will double its investment in primary schools. It will be donating at least 2.5m annually from October 2017. Chance to Shine was initiated to overcome the crisis of participation in state schools. Luke Swanson, Chance to Shine chief executive also thinks the new venture will enable the charity to reach an added 200,000 children a year: He was quoted in a report from bbc.com saying, “This money is about state primary schools and it’s really saying that the bedrock is working with children and giving them a great first experience of the game. We know that 60% of children who try cricket at school say they like the game. If you don’t try cricket at school only 1% say they like the game.”

ECB’s director of participation and growth, Matt Dwyer quipped, “The game is really aware of our relevance to kids, and now we’re saying ‘right, what are we going to do to make sure every child has the opportunity to be involved in the game? We’ve got a great calendar of events coming up [the Champions Trophy and Women’s World Cup will both be staged in England in 2017]. With the focus at a local level with participation, I can’t see why in five years time we can’t be England’s favourite sport.”

English cricketer Sam Billings assisted to operate a coaching session at St Mary and St Peter’s Primary School in south-west London. He said, Every career starts at the bottom level so it’s fundamental that these kids get the chance to play many sports, especially cricket. In many schools around the country its football dominated, cricket is not on the curriculum. Certainly in Bangladesh with England we had this conversation. I think it’s about a 50/50 split in terms of who went to state and independent schools, and club cricket plays a massive role too in getting that relationship right. Club cricket was a great benefit to me growing up but again, it starts with the schools.” 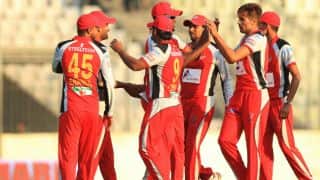