Elias Sunny bagged four wickets on his debut to boost Bangladesh's hopes of taking a first innings lead in the opening Test against the West Indies on Monday. 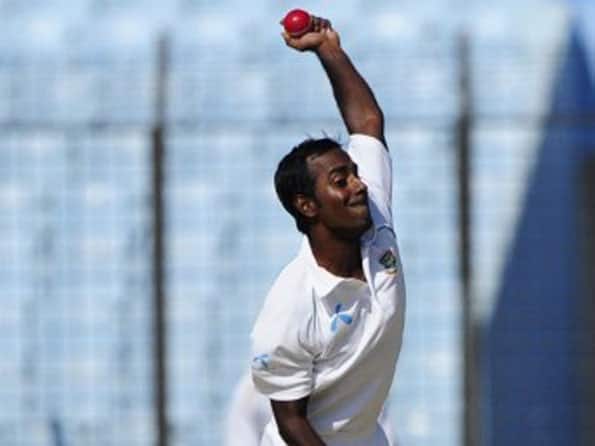 Elias Sunny bagged four wickets on his debut to boost Bangladesh’s hopes of taking a first innings lead in the opening Test against the West Indies on Monday.

The left-arm spinner took 4-56 as the West Indies reached 144-5 in their first innings at stumps on the penultimate day in reply to Bangladesh’s total of 350-9 declared.

Sunny, 25, did not have to wait long for his first Test wicket as he trapped Kirk Edwards leg-before in his third over before dismissing Darren Bravo (two), teenager Kraigg Brathwaite and Shivnarine Chanderpaul in the last session.

The West Indies were struggling at 52-3 before Chanderpaul (49) and Brathwaite steadied the innings with a 62-run stand for the fourth wicket.

Sunny again put pressure on the tourists when he removed both the batsmen in his last five overs. Chanderpaul’s 72-ball knock contained two successive sixes over long-on off the left-arm spinner.

Brathwaite, bowled off a no-ball in paceman Rubel Hossain’s opening over, scored a 135-ball 33 before being caught by Imrul Kayes.

Marlon Samuels was unbeaten on 17 and Carlton Baugh on six not out when bad light stopped play.

Bangladesh paceman Shahadat Hossain got a wicket in his second over when he had Lendl Simmons (seven) caught by Raqibul Hasan at gully.

Edwards, dropped on three by Shahadat at mid-on in Sunny’s opening over, failed to make the most of the chance as he fell after scoring 17 runs.

Bangladesh earlier added 95 runs to their Friday’s total of 255-4 before declaring their innings closed in the afternoon session. No play was possible on Saturday and Sunday due to rain.

Edwards struck with his first delivery when he had skipper Mushfiqur Rahim (68) caught by Bishoo at square-leg before dismissing Shahriar Nafees (32) in his next over. Rahim hit five fours in his 145-ball knock.

Nafees, who retired hurt on 21 after being struck by an Edwards bouncer on Friday, could add just 11 runs before being caught by wicket-keeper Baugh.

His third wicket came in the second session when he had Shahadat stumped for nine runs. Naeem Islam remained unbeaten with 36.

The second and final Test starts in Dhaka on October 29. (AFP)

I learnt a lot sitting out of playing Xl: Varun Aaron