A round-up of the Plate Group matches in round seven of the 2018-19 Vijay Hazare Trophy.

A round-up of the Plate Group matches in round seven of the 2018-19 Vijay Hazare Trophy.

With their third win in four matches, Bihar went top of the Plate Group with a thumping 108-run win over Meghalaya in round seven of the 2018-19 Vijay Hazare Trophy at Vadodara on Wednesday.

Buoyed by late order resistance from debutant Anshuman Gautam (40) and Ashutosh Aman (33), Bihar made 211 for nine in their 50 overs before bundling out Meghalaya for 103, with leg spinner Samar Quadri claiming 5 for 22 and Aman chipping in with 3 for 15. This was Meghalaya s second loss in four matches.

After putting Bihar in to bat, Meghalaya had a good start as they reduced Bihar to 102 for 5. Skipper Keshav Kumar made 33, while middle-order batsman Rohit Raj made 29. Gautam and Aman though combined for a stand of 34 runs to help Bihar to a respectable total. For Meghalaya, pacer Abhay Negi, who had taken 7 for 16 in the previous match took two today, with Lakhan Singh and Gurinder Singh also adding two each.

In reply, Bihar reduced Meghalaya to 29 for three with star player Puneet Bisht, who had made 135 against Arunachal, going for a four-ball duck. Former Delhi player Yogesh Nagar and Gurinder tried to rebuild scoring 22 each, but Quadri and Aman ran through the middle-order as the Meghalaya were all out in 42.5 overs.

At Nadiad, riding on a disciplined bowling effort Uttarakhand registered a facile win over Manipur. After opting to bowl first, Uttarakhand shot out Manipur for 125 with former Services and Tripura player Yashpal Singh waging a lone battle scoring 76.

In reply, debutant Arya Sethi (50) and skipper Vineet Saxena (52*) got together for a stand of 101 before Uttarakhand cantered home in 26.2 overs and nine wickets in hand.

In the third match of Plate group at Anand, Taruwar Kohli continued his terrific form hitting his second century (113) to help Mizoram get the better of Sikkim, who slumped to their fourth straight defeat in as many matches.

After opting to bowl first, Sikkim had Mizoram in trouble at 38 for 2 with Plazor Tamang claiming both the openers. Kohli then got together with Akhil Rajput (33) for a stand of 69 runs for the third wicket before adding 59 with Sinan Khadir (36) for the the sixth wicket and carried his bat through for his second List A hundred, helping Mizoram to 252 for six.

In reply, Tamang (47) and Lee Yong Lepcha (42) got together for a stand of 69 runs for the fourth wicket after Mizoram had reduced Sikkim to 60 for 3. Late-order hitting from Mendup Bhutia 40 off 37 ensured Sikkim got close to the target, but were all out for 210, losing the the match by 42 runs. For Mizoram, leg spinner Khadir took 4 for 35. 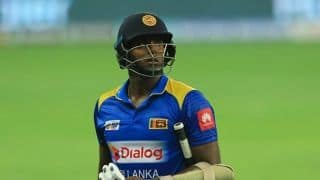