A round-up of the Elite Group C matches in round nine of the 2018-19 Vijay Hazare Trophy.

Gujarat registered a thumping eight-wicket win over Jammu and Kashmir in an Elite Group C match in Round Nine of the Vijay Hazare Trophy at the IIT Chemplast ground in Chennai on Sunday. Opting to bat, J&K were bundled out for 123. Irfan Pathan, who took a while to settle down, failed to capitalise on his time spent at the crease and departed after a sluggish 37-ball 22. Ian Chauhan too didn t look so threatening during his 59-ball 35 and was run out by Chirag Gandhi. For Gujarat, experienced leg-spinner Piyush Chawla was the pick of the bowlers with three for 29 in his nine over. CT Gaja, Hemang Patel and HP Patel all grabbed two wickets each to complete the rout.

In reply, Gujarat chased down the target in 21.1 overs. Priyank Panchal missed out on a half century by one run after he was caught behind by wicketkeeper Fazil Rashid off Waseem Raza. Bhargav Merai was unbeaten on 43. For Jammu and Kashmir, Umar Nazir and Waseem Raza claimed one wicket each.

At the SSN College ground in Chennai, Haryana won their match against Tripura by three wickets. Opting to bat, Tripura were bowled out for 171. Bravish Shetty top scored with 60. Harshal Patel (3/19) and Rahul Tewatia (3/27) were the pick of the bowlers. In reply, Haryana stumbled in their run chase. However, CK Bishnoi (55*) managed to hold the innings together during a placid 111-ball knock. Rajib H Saha snapped three wickets for Tripura.

At the MA Chidambaram stadium in Chennai, Tamil Nadu thrashed Bengal by six wickets. Put into bat, Bengal were all out for 239 in 49.4 overs. Opener AR Easwaran top scored with 72, while India discard Manoj Tiwary scored 47. TN skipper Vijay Shankar displayed his brilliance with the ball claiming four wickets in his eight-over spell with an economy rate of 4.25. M Mohammed claimed three.

In reply, Tamil Nadu chased down the target in 42 overs. Openers Abhinav Mukund (94) and N Jagadeesan (55) went on a rampage and stitched a 143-run partnership. Baba Indrajith chipped in with 43 runs. For Bengal, Prayas Ray Barman snapped two wickets. 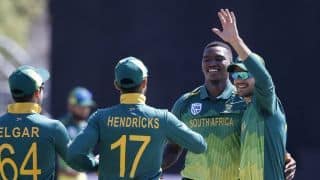 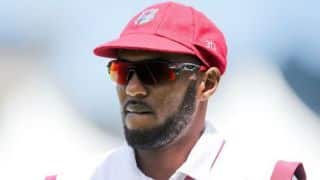