Klinger walked back after he was caught near the third man boundary by Steve O Keefe off Ben Dwarshuis in the second over of Scorchers innings.

In an embarrassing sequence of events during a Big Bash League 2018-19 match between Perth Scorchers and Sydney Sixers on Sunday, opener Michael Klinger was dismissed on the seventh delivery of an over during the hosts chase at the Optus Stadium.

Klinger walked back after he was caught near the third man boundary by Steve O Keefe off Ben Dwarshuis in the second over of Scorchers innings. The on-field umpires Geoff Joshua, Simon Fry, went up to check if the catch was cleanly taken and replays showed that O Keefe had his fingers underneath. (ALSO READ: Nathan Coulter-Nile slams Australian selectors for poor communication)

However, what the umpires did not realise was the Australian batsman was dismissed in the seventh ball of the over. Klinger scored one from five balls, unaware of the situation. Scorchers coach Adam Voges said the incident was not ideal . Obviously it s the umpires jobs to count the number of balls in an over, Vogues told Channel Seven. (ALSO READ: Melbourne Renegades end Hobart Hurricanes unbeaten streak)

The situation proved to be inconsequential in the match as the Scorchers chased the 178-run target with seven wickets and seven balls to spare. Opener Cameron Bancroft top scored with a brilliant unbeaten 87 off 61 balls. He was well-supported by Ashton Turner, who scored 60 from 30 balls. 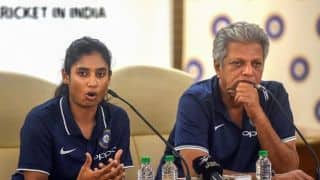