The Delhi duo added 126 runs for the fourth wicket after India suffered a few early blows, while chasing 173.

Colombo: Nitish Rana and Himmat Singh struck unbeaten half-centuries to help India beat Pakistan by seven wickets and seal a spot in the final of the ACC Emerging Teams Asia Cup on Thursday.

The Delhi duo added 126 runs for the fourth wicket after India suffered a few early blows, while chasing 173.

Rana scored 60 in as many balls, while Himmat made 59 off 58 deliveries with India overhauling the target in 27.3 overs. Singh smashed five sixes including three successive ones off Mohammad Asgar, while Rana hit three maximums.

Winning the toss and inviting Pakistan to bat first, India bowled out Pakistan for 172 in 44.4 overs.

Captain and wicketkeeper Mohammad Rizwan top-scored with 67, while Saud Shakeel contributed 62 runs. Opener Zeeshan Malik made 17 runs. Leg-spinner Mayank Markande was the most successful bowler for India, returning figures of 4/38 in 9.4 overs.

Mayank Markande was on today!
His 4/38 restricted Pakistan to a subpar total earning him the second Man of the Match Award.#INDvPAK #ETAC2018 pic.twitter.com/YI5QWO34dF

India, who were placed in Group A, defeated Afghanistan by 84 runs in their opening match and capped the group round with a six-wicket victory over Oman and a four-wicket win over Sri Lanka.

Pakistan started the tournament on a high, thrashing Hong Kong by 225-runs in their opening match. Pakistan then defeated United Arab Emirates (UAE) by nine wickets, but lost to Bangladesh on Sunday by 84 runs in their Pool B match to set-up a semi-final clash with their arch-rivals.

Can India go all the way in the Emerging Teams Asia Cup?

Today’s Man of the Match Himmat Singh has his say#ETAC2018 pic.twitter.com/SZKcmjoUSI

A total of eight teams – Sri Lanka, Afghanistan, India, Oman, Pakistan, Bangladesh, Hong Kong and UAE – are participating in the tournament, which kicked off on December 6.

The final will be played here on Saturday. 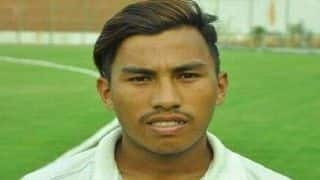