Skipper Kumar Sangakkara and Cameron White's brutal hitting at the death proved to be the decisive factor as Deccan Chargers defeated Pune Warriors by 13 runs in their Indian Premier League match, on Tuesday. 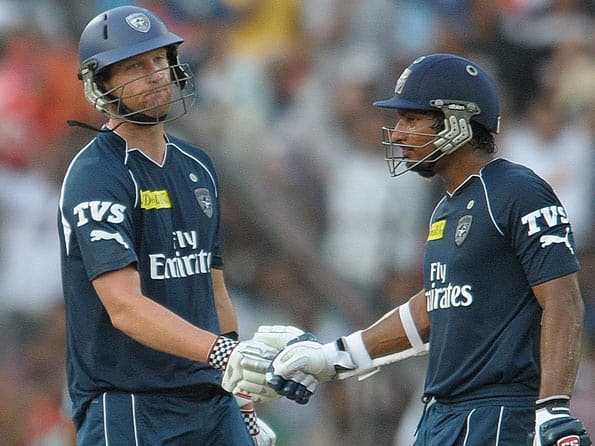 Skipper Kumar Sangakkara and Cameron White’s brutal hitting at the death proved to be the decisive factor as Deccan Chargers defeated Pune Warriors by 13 runs in their Indian Premier League match, on Tuesday. The win takes Deccan Chargers’ points tally to five in the Points Table while, having lost four matches, Pune Warriors are at the seventh position.

Sangakkara’s partnership of 157 for the third wicket with White, which is incidentally the highest third-wicket stand in the history of IPL, ensured that home team post a massive total.

The key was the 18th and 19th over of the Chargers innings when Sangakkara and White took 25 runs each to consolidate their position. It was 40-year-old Pune skipper Sourav Ganguly who was clobbered for 25 runs in the 18th over which changed the complexion of the match.

In reply, the Warriors lost Manish Pandey with nothing on the board in the very first ball of the innings, but Sourav Ganguly (45 off 40) and Clarke (41 off 31) kept alive the visiting team’s chances by scoring at a brisk pace.

Steven Smith top-scored for the visitors with a well-made 47 off 27 balls but his effort went in-vain.

But before his arrival, it was the duo of Ganguly and Clarke that dominated the proceedings.

The two played some breathtaking shots during their 90-run stand for the second wicket but Ganguly was also guilty of playing too many dot balls which increased the pressure.

One of the world’s premier fast bowlers, Steyn was hit for two successive boundaries by Ganguly on either side of the wicket but he was unusually subdued against his statemate Veer Pratap Singh whom he couldn’t hit for boundaries.

That was not all as Steyn leaked 17 runs in his next over. Ganguly launched the assault by hitting the pacer over cover in his trademark style and after that, Clarke collected three fours — one over square-leg and two through point — to put the pressure back on the Chargers.

There was some respite for the Chargers after Amit Mishra ran Clarke out in the 12th over.

Even as the regular bowlers failed to make a breakthrough, Shikhar Dhawan’s part-time spin did the trick as he had Ganguly caught by White at cover.

With two new batsmen at the crease, it was not easy for Pune to keep up with the required run-rate, but Smith and Robin Uthappa tried their best to make a match of it.

But in the end, it was Sangakkara and White’s onslaught that made the difference and helped Chargers record their second win of the league.

Sangakkara — who wasn’t exactly in his element till today’s match — roared back into form with a brilliant knock.

Having managed only 91 in 14 overs, Sangakkara and White hammered the Pune bowlers in the last six overs.

Opting to bat after winning the toss, Chargers did not have a good beginning to their innings as Marlon Samuels accounted for Parthiv Patel’s wicket with the very first ball of the match.

Wayne Parnell then followed it up with a maiden over to give the visitors an ideal start.

Things got even worse for the hosts when Bhuvneshwar Kumar sent back Shikhar Dhawan (13) after he had started to show some spark, having hit Samuels for a couple of fours.

The Chargers would have been three down in the very next over, had wicketkeeper Robin Uthappa taken an easy catch off Parnell to see off Cameron White, who had hit a match-winning 46-ball 78 in the previous game against the same opponents.

But luck favoured the hosts and determined to capitalise on the life he got, White along with Sangakkara went on to play a cautious innings, reaching 58 for two after 10 overs.

Even as the duo managed a couple of fours and sixes whenever they got lose balls, they actually failed to accelerate the innings.

But Sangakkara suddenly turned the tide around as churned out as many as 19 runs off Samuels over, hitting four boundaries to lift his team beyond 100-run mark.

He followed it up with another 12 runs of the next over of Parnell to set his team for a competitive total.

White then joined his partner in the run-riot as he went on to steal 25 runs off Ganguly’s over, hitting him for three consecutive sixes and a four to completely turn the match in the Chargers’ favour.

The next over of Nehra was no different as that yielded also another 25 runs before Sangakkara got out of the last ball. The Ganguly-Nehra combination in seven overs gave away 80 runs which could prove to be decisive in the end.

White lost his wicket in the first ball of the final over but by then the damage was done. (PTI)