Ravindra Jadeja (78 off 89 balls) posted his career-best innings in ODIs, eclipsing an unbeaten 60 against Sri Lanka at Colombo, on February 8, 2009. 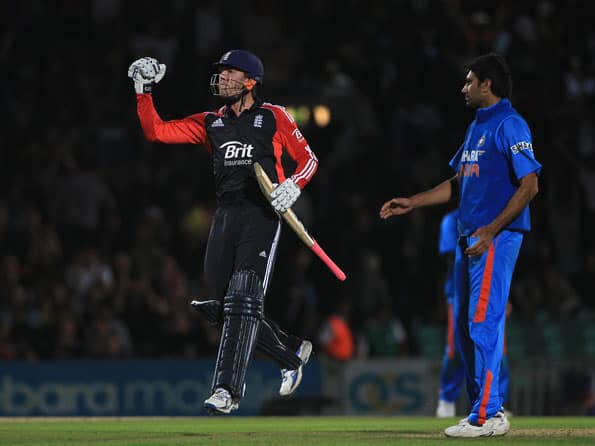 Statistical highlights of the third one-dayer between India and England.

# Ravindra Jadeja (78 off 89 balls) posted his career-best innings in ODIs, eclipsing an unbeaten 60 against Sri Lanka at Colombo, on February 8, 2009.

# Jadeja registered his fifth fifty in ODIs – his first against England on maiden appearance.

# India have lost all five ODIs when Jadeja registered a fifty.

# Jadeja’s 78 is the second highest by a number seven Indian batsman against England in ODIs. Mohammad Kaif had made an unbeaten 87 at Lord’s on July 13, 2002.

# England’s win by 3 wickets is their narrowest winning margin against India in terms of wickets at The Oval.

# England have won five, lost two out of eight contested against India at The Oval (one no-result).

# Ravichandran Ashwin (3/40) recorded his best bowling performance on foreign soil in ODIs – his career-best figures are 3 for 24 against New Zealand at Chennai on December 10, 2010.

# Jadeja has become the second Indian all-rounder to make 75 or more and capture two wickets in the same match in England. Robin Singh (75 and 2 for 43 against Australia in the 1999 World Cup) was the first to achieve the distinction.

# Craig Kieswetter’s first fifty against India is his fourth in ODIs. His previous highest against India was 46 at Southampton on September 6, 2011.

# For the first time in ODIs, Jadeja has been adjudged the Man of the Match away from home.

# James Anderson is the leading wicket-taker at The Oval, capturing 19 wickets at an average of 21.52 in ten ODIs – the most by a bowler at this venue.

# Dravid has been dismissed ‘run-out’ 40 times – an Indian record. Marvan Atapattu holds a record of being dismissed 41 times.

# Dravid’s overall tally of 53 run-out dismissals in international cricket is an unwanted feat.

# Ravichandran Ashwin (36 not out) posted his second highest innings in ODIs – his highest is 38 against Sri Lanka at Harare on June 5, 2010.

# Mahendra Singh Dhoni (69) became the first Indian skipper to make a fifty at The Oval in ODIs. He has recorded his highest innings against England in England, surpassing 50 at Lord’s on September 8, 2007.

# Dhoni and Jadeja were associated in a stand of 112 – India’s second highest for the sixth wicket in England – the highest is 121 between Mohammad Kaif and Yuvraj Singh against England at Lord’s on July 13, 2002.

# Jadeja and Ashwin were involved in a stand of 59 for the seventh wicket – India’s highest against England in ODIs, bettering the 52 between Abid Ali and Brijesh Patel at Leeds on July 13, 1974.

# The partnership is India’s second best in terms of strike rate when they put on 50 or more against England. The pair has managed 11.41 runs per over. Sachin Tendulkar and Yuvraj Singh, had batted 11.63 runs per over while posting an unbroken stand of 64 for the fifth wicket at Chester-le-Street on July 4, 2002

# Dhoni has recorded his 25th fifty as captain in ODIs – his 39th overall. (PTI)