New Zealand, who are one point above England and are sitting in third place, have suffered back-to-back setbacks against Pakistan and Australia.

The Kane Williamson-led side have been ordinary in their batting in the last two games and they would desperately hope to improve on that front and make a solid comeback into the tournament. Williamson needs Martin Guptill to fire, much like he did in the 2015 edition, where he had emerged as the leading run-scorer of the tournament.

An attack led by left-arm quick Trent Boult, who took a hat-trick hero against Australia, and featuring the express pace of Lockie Ferguson is a testing proposition for any side and they would like to stop the attacking English batting line-up from bludgeoning.

In Durham, apart from the New Zealand fans, Pakistani fans can also be expected to be present in big numbers to cheer for the Black Caps because their win could pave way for the Green Brigade to enter the semifinals.

What: England vs New Zealand

Weather: Partly cloudy with a high of 20 degrees Celsius 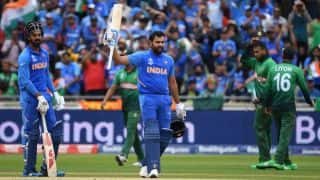