Joe Root, Gary Ballance, and Ben Stokes played defining knocks to take England from a precarious 43 for 3 in the first session.

Joe Root, Gary Ballance, and Ben Stokes played defining knocks to take England from a precarious 43 for 3 in the first session to a commanding 343 for 7 at stumps on Day One of the first Ashes Test against Australia at Cardiff on Wednesday. Root scored a terrific 134 off only 166 deliveries — it was the sixth fastest Ashes ton by an Englishman — while Ballance dug in for a 149-ball 61, and Ben Stokes hit a stroke-filled 52. For Australia, Mitchell Starc was wayward but managed to take wickets nonetheless, though Mitchell Johnson was largely ineffective on a low and slow Cardiff pitch. Live Scorecard: England (ENG) vs Australia (AUS) Ashes 2015 1st Test at Cardiff, Day 1

After Root and Ballance ensured a wicketless second session, Josh Hazlewood struck early to remove the latter. Ballance missed a straight ball and was out LBW for 61 after doing all the hard work and getting in. Stokes, batting at No. 6, came out swinging and hit six fours and two sixes in his stay at the crease. Live Blog: England (ENG) vs Australia (AUS) Ashes 2015 1st Test at Cardiff, Day 1

Stokes played a sensible innings, keeping up England’s momentum without slogging at everything. He kept the runs coming at a fair clip, even after Root suffered a lapse in concentration and edged an innocuous Starc delivery to Shane Watson at slip. He was bowled by an excellent swinging full delivery from Starc, who gave him a bit of a send-off by putting his finger on his lips. READ: Phil Hughes’ final Test series in Ashes 2013

Jos Buttler and Moeen Ali then mixed caution with aggression to ensure that England kept the runs coming. However, with just about five overs left in the day’s play, Buttler played an unintelligent shot, hitting Hazlewood to Johnson at mid on. Hazlewood was the only consistent pacer on the day, and his returns reflected that, with three wickets. Moeen was unbeaten on 26 at stumps. Read: History of Ashes — How the urn changed hands, Part 1 of 4

Earlier, Root and Ballance dug in brilliantly to ensure that Australia took no wickets in the second session as England were firmly in command at 190 for 3 at tea. Root was closing in on yet another century, while Ballance was looking solid in his half-century after a shaky start. The duo, who came together at 43 for 3, added 153 runs for the fourth wicket. Read: History of Ashes — How the urn changed hands, Part 2 of 4

Starc and Mitchell Johnson were both wayward, each going at more than four runs per over. Hazlewood and Nathan Lyon were tidy, and Shane Watson was steady without ever been probing. Brad Haddin would be ruing dropping Root when the latter was still on 0. Read History of Ashes — How the urn changed hands, Part 3 of 4

The Ashes 2015 took its time to begin after a few minutes delay due to rain and a prolonged opening ceremony. England won the all-important toss and Alastair Cook decided to bat first. After England suffered from early wickets to fall to 43 for 3, Root and Ballance added an unbroken 65 to take England to a relatively secure 88 for 3 at lunch. READ: Joe Root scores half-century in The Ashes 2015 1st Test at Cardiff 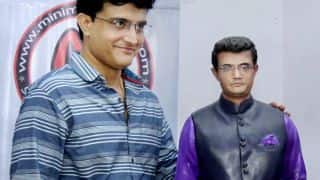