India bagged honours at stumps on the second day as they kept England in check after posting a healthy first innings total of 457 in the first Test at Trent Bridge on Thursday. England are 43 for one, 414 runs behind. The day witnessed a potentially match-winning moment for India as their 10th-wicket pair of Bhuvneshwar Kumar (58) and Mohammed Shami (51 not out) shared a 111-run stand.

When things go wrong you can’t measure the extent to which it can go haywire. First the flat pitch, then a classy innings from Murali Vijay followed by a ray of hope with India nine down for 346. And then comes the humiliation of bowling to a last-wicket pair for close to three hours. After all that, skipper Alastair Cook is bowled round the legs to a pacer. For the second consecutive day, India have managed to recover after slipping in the middle phase of the day. The scenario could’ve been completely different if England had plucked the last wicket early.

Stat: India have never lost a Test match after scoring more than 450 in the first innings of a Test.

Stat: Mohammed Shami has the second highest score by an Indian at No. 11

Nevertheless, it was a classy performance from the Indian batting overall. Resuming the day at 259 for four, Vijay and MS Dhoni treaded cautiously. James Anderson and Stuart Broad were accurate not allowing any scope for easy runs. Matt Prior though committed the crime of dropping Dhoni in the third over of the day. While Dhoni took time to settle in, Vijay continued from where he had left behind on Day One. After the first hour of play, he unleashed the cross-batted strokes, the wristy flicks and drives. 83 runs were scored in the first session. It was almost India’s session until Anderson brought some respectability with the wicket of Vijay for 146. Dhoni and Ravindra Jadeja put on a flashy partnership before the break.

The first 30 minutes after the lunch session is something Dhoni and the team management will be racking their brains to decipher the cause for such a brain-freeze. While Jadeja got out trying to cut, Dhoni threw away the painstaking innings for a tight single. Debutant Stuart Binny perished for one and Ishant Sharma was bowled by Broad. 20 minutes in to the second session India had lost four wickets for two runs in a space of 20 deliveries.

What followed was yet another example of cricket’s glorious uncertainties. While most players in the Indian dressing room were getting ready to come out and field, Bhuvneshwar and Shami were in no mood to budge. At one point, Cook had three close fielders in a line from mid-on to midwicket to push a wristy Shami to flick. But Shami proved to be a much matured batsman and flicked it fine towards deep square-leg with one of them being a boundary. There were hardly any reckless tail-ender shots in the partnership. Even the slogs were cleanly hit by Shami. It was only a matter of time that they got their well-deserved fifties post tea. It was Bhuvneshwar who got out on 58 thus ending the 111-run stand and India posting 457. This was the fourth occasion when the last-wicket stand put on a century partnership for India.

When England came out to bat, Bhuvneshwar had already started to swing and Shami was also accurate from the other end. The wicket was as good as it was when India were batting. But bad patches can be cruel. Cook was bowled round his legs by Shami as the ball brushed past his thigh pads to rattle the stumps. 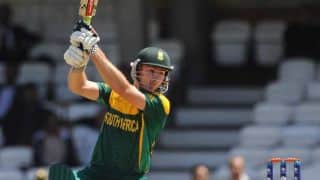