Riding on Joe Root s 10th One-Day International (ODI) century, hosts England thrashed Bangladesh by 8 wickets in the opening game of the ICC Champions Trophy 2017 at The Oval on Thursday. Invited to bat first, Bangladesh opener Tamim Iqbal scored his 9th ODI century to propel his side to 305. Tamim received excellent support from wicketkeeper-batsman Mushfiqur Rahim who scored a glitzy 72-ball 79. However, Root s hundred and fifties by Alex Hales and Eoin Morgan sealed the deal for England. They had a minor hiccup, when they lost opener Jason Roy (1) early. But Root, Morgan and Hales got the job done in style. FULL CRICKET SCORECARD, ICC Champions Trophy 2017, England vs Bangladesh Match 1

Speaking at the post-match presentation ceremony, Root asserted the win to be the perfect start for the hosts who are touted to be the favourites to win the tournament. “It (the performance by England) is going to get better. Lot of confidence in the dressing room. We back each other’s abilities and it rubs on everyone, he said.

Despite having a target which required runs at more than 6 per over, the English side never looked flinching. England are regarded as a side with one of the best batting line-ups. Talking about England s batting strength, Root said, It’s nice to have Buttler and Stokes coming after you. It’s about making sure that we have plenty of wickets at the back end. One of the top four/five has to get a 70 or a 100 not out. Sure there will be different scenarios in the tournament but we have to give it our best. Good to start on this note. Ankle is alright, it’s more of a calf issue.”

England will now play their next game against New Zealand on June 6 at the Sophia Gardens, Cardiff whereas Bangladesh lock horns with Australia at this very venue on June 5. 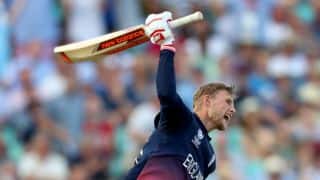