Fast bowler Steven Finn and Ben Stokes have been included in the team as they have recovered from injuries.

England on Wednesday announced their 15-man squad for the two-match Twenty20 International (T20I) series in South Africa, which will be played towards the end of their tour, in February 2016. There are no real surprises in the team with Eoin Morgan being named the captain and the likes of David Willey, Reece Topley, Sam Billings and James Vince retaining their places in the England T20 side for the two-match series. Fast bowler Steven Finn and Ben Stokes have been included in the team as they have recovered from injuries. England have already reached South Africa for a full tour, in which they will be playing four Tests in the Basil D’Oliveira Trophy 2015-16, five One-Day Internationals (ODIs) and two T20Is. The tour begins on December 26 at Durban, and will end on February 21, 2016 with the second T20I at Johannesburg.

The English national selector, James Whitaker said in a press release, “The limited overs cricket played by this group of players in the last six months has been very encouraging but we are all aware that there is still plenty of work to do. This ODI series against South Africa will be another important opportunity for these players to keep learning and developing their skills. With an ICC World T20 later this winter the T20 matches will be a crucial part of our preparations. On behalf of the selectors I would like to wish Eoin and Trevor all the very best.”

The two-match T20I series will be the final leg of England’s tour of South Africa 2015-16. The two teams will be taking on each other in a four-match Test series, followed by five ODIs. The first and the second T20Is will be played at Cape Town and Johannesburg on February 19 and 21 respectively.

Hanif Mohammad celebrates his 81st birthday with a goofed-up cake! 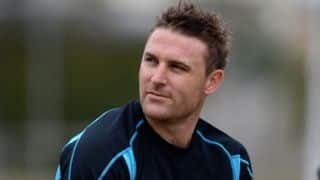