James Anderson, who has taken a record 473 Test wickets for England, had already been ruled out of next month's opening Test in Rajkot as he is recovering from a shoulder problem.

Fast bowler James Anderson was left out as England named an unchanged 16-man squad on Tuesday for their five-Test series against India Anderson, who has taken a record 473 Test wickets for England, had already been ruled out of next month’s opening Test in Rajkot as he is recovering from a shoulder problem. The 34-year-old was forced to miss England’s ongoing series in Bangladesh, but could join the squad for the remaining four Tests of the India tour. England are also without paceman Mark Wood due to an ankle injury, but they elected not to draft in another seamer, leaving the squad unchanged from the two-Test series with Bangladesh. FULL CRICKET SCORECARD: India vs England, 1st Test at Rajkot

Stuart Broad, Chris Woakes, Ben Stokes, Steven Finn and Jake Ball are the pace bowlers in the squad, with Moeen Ali, Adil Rashid, Gareth Batty and Zafar Ansari supplying spin. England secured a 22-run victory over Bangladesh in Chittagong on Monday and will close the two-Test series in Dhaka this weekend. England will also do away with their opening batsman Alex Hales, who had dropped out of the Bangladesh series due to security concerns and was expected to be back for the India tour.

England launch their series against India in Rajkot on November 9 and will also play matches in Visakhapatnam, Mohali, Mumbai and Chennai. The Test series will be followed by the One-Day International (ODI) and Twenty20 International (T20I) series. There is no confirmation on Eoin Morgan to play the ODI series against India yet, however, England coach is hopeful of the skipper to be back for limited-overs cricket. ALSO READ: India vs England: Saqlain Mushtaq hired England s spin consultant 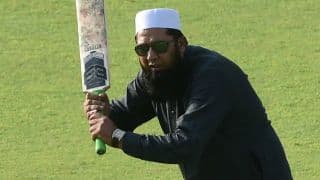 Inzamam-ul-Haq: Saeed Ajmal will be considered for selection based on his form