England skipper Alastair Cook and Ian Bell broke a 30-year-old opening partnership record as the visitors piled on an imposing total of 325 for 4 in the first cricket one-dayer against India at Rajkot on Friday. 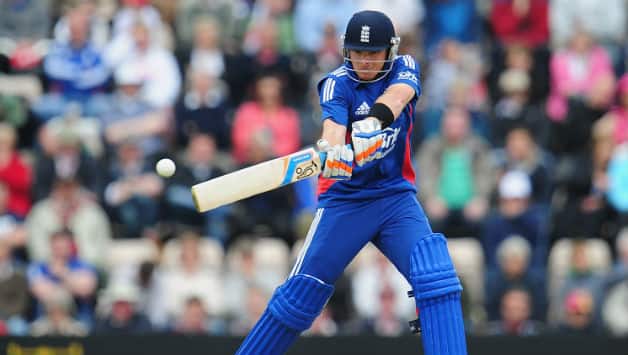 England skipper Alastair Cook and Ian Bell broke a 30-year-old opening partnership record as the visitors piled on an imposing total of 325 for 4 in the first cricket one-dayer against India at Rajkot on Friday.

Cook, who had buried India with three tons while totalling 562 runs in the four-Test series won by his team last year, and Bell compiled a partnership of 152 for the first wicket, breaking a 30-year record for England against the hosts in the process.

Left-handed Cook made 75 in 84 balls with 11 fours and a six while his right-handed partner was slightly more aggressive in making 85 off 95 balls with nine fours and one six.

The duo left in close succession just past the half way stage of the innings but their good work was continued by Kevin Pietersen and Eoin Morgan.

However, Samit Patel smashed 44 not out in 16 balls, with six fours and a six, and added 70 runs in the last six overs with Craig Kieswetter who remained unbeaten on 24 off 20 balls with a four and two sixes.

Most of the Indian frontline bowlers were expensive.

Dinda, who was preferred over Shami Ahmed despite the latter’s impressive debut against Pakistan in Delhi last Sunday, was the most successful with 2 for 53.

Ashwin was expensive with poor figures of none for 61 in nine overs. Senior placer Ishant Sharma conceded 86 runs in his 10 overs, including 20 in his last, which is his worst display in his 51 ODIs while rookie Bhuvneshwar Kumar was also punished by the England batsmen.

Surprisingly, not a single over was given to known partnership-breaker Yuvraj Singh.

England, who had lost their previous ODI series in India 0-5 four years ago, set the hosts a stiff asking rate of 6.53 to win the game and take a 1-0 lead in the best-of-five rubber.

The Indian bowlers leaked runs aplenty in the face of the sustained assault on a good batting track by the England opening duo after Cook won the toss and chose to take first strike.

There was no false strokes from Cook and Bell barring an edged shot for four by the matter, that saw Dhoni and lone slip Ashwin looking at each other as the ball bisected the duo, off Bhuvneshwar Kumar.

Right-handed Bell was the more aggressive batsman initially. Cook hit his first boundary in the sixth over and struck two more in the same over of Ishant Sharma to banish the lanky right handed pacer from the attack.

Bell was also rapped on the pads by Bhuvneshwar but umpire Steve Davis did not uphold the appeal. Thereafter, the opening pair did not give a chance to the Indians till Bell was run out by a superb piece of fielding by Ajinkya Rahane in the 28th over.

After 10 overs, the score was 54 and with the introduction of spin the run-rate dropped below five before it picked up again as the 100 came in the 19th over. At the end of 20th over, the score was 112 for no loss, the duo’s second century stand for the first wicket in nine attempts.

Bell had earlier stepped out to left arm spinner and local boy Ravindra Jadeja to cart the bowler over the long off region for the first six of the game and then reverse hit the spinner for another four to reach his 50 in 60 balls.

Cook started to attack Ashwin and slog swept the off spinner for a four and a near four which was stopped on the boundary line.

Ashwin, after a four-over first spell for 20 runs, changed ends but failed to stem the flow of runs with Cook, who had scored plenty against him in the preceding Test series, once again exercising his dominance.

A four and a single off Ashwin helped Cook complete his 50 in 80 balls with the help of 9 fours. In the next over the England captain carted the off spinner for a six over long off and a pulled four to spoil his second spell in which Ashwin gave away 22 runs in 3 overs.

The blows helped the partnership assume record proportions overtaking the previous first wicket highest stand of 133 between Barry Wood and Chris Tavare in 1982 at Headingley. It was the 82nd ODI meeting between the two countries.

Suresh Raina was brought on for Ashwin and in his second over came the much-needed breakthrough for the hosts when Bell was run out at the striker’s end through a smart pick-up and accurate throw at the stumps by Ajinkya Rahane as Cook called him for a sharp single after inside edging to fine leg.

The partnership was snapped in the 28th over after the openers had laid a splendid platform for the others to take advantage of.

Then Raina struck another blow by inducing a top-edged sweep from Cook to send back the England skipper via a catch by Rahane at the same fine leg position, four overs later.

The loss of the two openers within a short span and for the addition of just 14 runs brought the home side back into the innings as at the start of the bowling power-play, England were 188 for 2 in 35 overs.

But Ashwin and Sharma were incapable of stopping the rampaging duo of Pietersen and left handed Morgan in this five-over period as 44 runs were scored by the visitors who raced to 232 for 2 by the end of the 40th over. 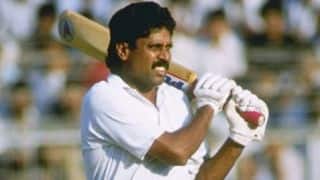