Fresh from a surprising 2-1 triumph in the Wisden Trophy duel, Jason Holder leads a Caribbean team which will aim at improving in ODIs.

England enter the home stretch of World Cup preparation with a five-match one-day international series beginning on Wednesday at the Kensington Oval against a West Indies team seeking to feed off the success of their Test side. Fresh from a surprising 2-1 triumph in the Wisden Trophy duel, Jason Holder leads a Caribbean team which continues to struggle in the 50-over format and is hampered by the absence of key players for a variety of reasons.

In contrast, Eoin Morgan‘s England settled squad have powered to the top of the world rankings and a comfortable 171-run victory in their lone warm-up fixture on Sunday suggests that they will not be hamstrung by the challenges encountered by the Test team against surprisingly competitive and fiercely motivated opponents.

Opening batsman Jason Roy and Test skipper Joe Root both stroked fluent hundreds in a total of 371 for seven, while all the bowlers used enjoyed a measure of success against the West Indies Vice-Chancellor’s XI with opening bowlers Mark Wood and Chris Woakes, together with legspinner Adil Rashid, taking two wickets each.

While the memory of a 381-run thrashing in the first match of the three-Test series less than a month ago is painfully fresh, England’s last ODI at Kensington Oval two years ago was a 186-run rout which completed a 3-0 sweep of a home outfit in complete disarray.

West Indies results have not improved significantly since that humbling, with the former champions missing out on the 2017 Champions Trophy and scraping through last year’s qualifying tournament in Zimbabwe to advance to the World Cup in England and Wales, which starts on May 30.

Already without mystery spinner Sunil Narine and all-rounder Andre Russell, West Indies have been forced to amend their original squad for the first two ODIs with injuries ruling out opening batsman Evin Lewis and all-rounders Rovman Powell and Keemo Paul.

Gayle to retire from ODIs

John Campbell, who made a bright start to his Test career in the three matches against the English, looks set for an ODI debut opening the batting with Chris Gayle. On Sunday, the 39-year-old veteran of four World Cups revealed that the 2019 event will be his farewell to the format, although he entertains hopes of representing the region at the end of 2020 when the West Indies will be defending the World T20 title in Australia.

“Yes I’m looking to draw the line after the World Cup,” said the big-hitting left-hander and former captain. “I’ll let the youngsters have some fun and I can sit back in the party stand and watch them have some fun. Winning the World Cup would be a fairytale finish.”

T20 captain Carlos Brathwaite and left-arm pacer Sheldon Cottrell are the recent inclusions in the West Indies squad along with Campbell, while the regional selectors also have to contend with the unavailability of Shannon Gabriel until the final match after the fast bowler was slapped with a four-match ban after admitting to uttering a homophobic slur at Root during the third and final Test in St Lucia a week ago.

England are spared such challenges but will be acutely aware of the embarrassing reversals suffered by their Test team against opposition which was lightly-regarded before the first ball was bowled on this tour at Kensington Oval last month. 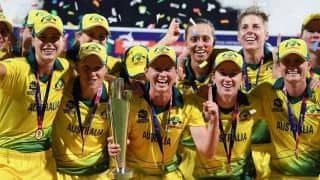 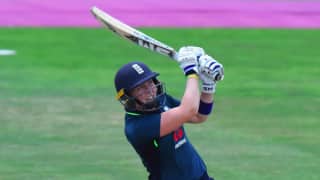