England posted a fighting total of 268 after being asked to bat in the first ODI against India at Trent Bridge, Nottingham. England got off to a good start on a flat wicket but Kuldeep Yadav‘s six-wicket haul helped India to bowl them out within 50 overs. He recorded best bowling figures by a spinner against England, best figures by left-arm spinner and also fourth best-figures by an Indian.

The Indian pacers started well, bowling a tight good length deliveries and not allowing the batsmen to open their arms. However, The English batsmen held their nerves and started scoring after they were set. They scored 71 in the first Powerplay and seemed comfortable against pacers. It was again the spin duo for India who got the breakthrough. Just after the Powerplay, Jason Roy who was playing well on 38 tried to reverse-sweep Kuldeep but ended up hitting it straight to Umesh Yadav at cover.

Kuldeep again struck twice in his next over dismissing Joe Root and the well set Jonny Bairstow for 3 and 38 respectively. Trying to defend on the back-foot, Root played for the googly that which turned in; Root was trapped plumb. Bairstow was undone by a googly in the same over. He failed to read the ball as India got him leg-before off a review.

Just when there seemed to be a partnership building between Eoin Morgan (19) and Ben Stokes, Yuzvendra Chahal struck gold. Trying to get the ball past mid-wicket, Morgan ended up giving a simple catch to Suresh Raina.

Jos Buttler and Stokes set the stage for the host guiding England to a competitive total. They stitched a partnership of 93 for the sixth wicket. Buttler, who has been in splendid form of late, scored 53 to steady things. He eventually fell to Kuldeep trying to hit down leg as MS Dhoni took a well-judged catch. He scored 53 with 5 boundaries. Stokes played hard to get to his 50 off 102 balls with only 2 boundaries.

However, he was soon dismissed in the next over of Kuldeep trying to sweep him as Siddarth Kaul took a diving catch at backward point. With this wicket Kuldeep claimed his first five-wicket haul in ODIs. In the same over he dismissed David Willey to become the first ever left-arm wrist-spinner to take 6 wickets in ODI; he finished with 10-0-25-6.

Moeen Ali found the ropes on few occasions in the last over, and fell to Umesh, while trying to go for a six. Virat Kohli took a comfortable catch at deep mid-wicket. Adil Rashid got out in similar fashion, caught by Hardik Pandya.

Other than Kuldeep, Chahal and Umesh got wickets as well. Kaul had figures of 10-0-62-0 on debut, while Suresh Raina bowled the only maiden over, going for 8 off his 3 overs. 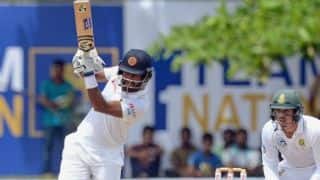