New Zealand bowling first rocked England in the first Test at Auckland. The first ever day-night Test in New Zealand, saw visitor’s bowled out for 58; their sixth lowest and lowest against New Zealand. It was Trent Boult and Tim Southee, who shared 10 wickets between them. There were as many as 5 ducks for England, including the likes of Joe Root, Ben Stokes and Jonny Bairstow.

Boult went on to pick 6 wickets, in the process claiming his career best figures. It was Craig Overton, who helped England reach 50-run mark from being 28 for 9. He scored 33 from 25 balls. Only Mark Stonemark managed to reach double figures apart from Overton.

Boult went on to claim his career best Test figures of 6 for 32. His new-ball partner Tim Southee took four wickets for 25. The pitch for the first day-night Test in New Zealand has a slight green tinge, but not enough to concern the batsmen. Instead they were undone by precision swing and seam bowling that started in the fifth over when Alastair Cook prodded at a full-length Boult delivery that moved away and was caught at second slip by Tom Latham for five.

It started a steady flow of batsmen going to and from the crease.

Captain Joe Root, batting at number three to allow for the inclusion of Overton as an extra bowler, lasted six balls before he was bowled by Boult for a duck.

England’s 58 is the second lowest score at Auckland after New Zealand 28 all out, that came against England. 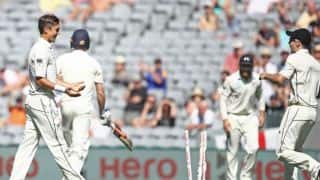