Shikhar Dhawan fell to Joe Root after a watchful innings of 37 off 85 balls as India slipped further.

Shikhar Dhawan fell to Joe Root after a watchful innings of 37 off 85 balls as India slipped further in their second innings in the ongoing third Test match at Southampton. India were  80 for three after 29 overs chasing 445 to win.

Dhawan and Virat Kohli had steadied India after they lose two wickets in quick succession during the final session’s play on Day Four against England at Southampton on Wednesday. India were  69 for two after 24 overs chasing 445 to win.

Dhawan fell after hitting 37 off 85 balls with the help of six boundaries. Kohli was batting on 21 not out as he has been joined by Ajinkya Rahane.

India lost their quick wickets in form of Murali Vijay, who was run out for 12, and Cheteshwar Pukara during the chase of 445 against England in the third Test match at Southampton on Wednesday.

Pujara was removed by England spinner Moeen Ali, who claimed his third wicket in the game. India were 29 for two after 12.12overs, with Shikhar Dhawan batting on 11 not out. 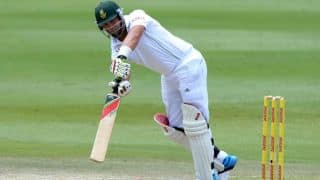