Harrison announced the ECB planned to spend 180 million on The Hundred over the next five years.

English cricket’s top administrator believes the world game’s best players will be involved when the controversial new Hundred tournament is launched next year, despite the scepticism of India captain Virat Kohli.

Tom Harrison, the chief executive of the England and Wales Cricket Board (ECB), has insisted the eight-team domestic competition, in which matches will be 100 balls per side, 20 balls per innings fewer than Twenty20, the shortest existing senior format, is central to plans to develop the English game between 2020 and 2024.

“I think we will be very successful in getting players to come over,” Harrison told reporters in London on Monday when asked if the world’s best cricketers would take part in a new event given their extensive international commitments and participation in lucrative Twenty20 tournaments such as the Indian Premier League (IPL) and Australia’s Big Bash League (BBL).

“I think it will be a good training ground for international Twenty20,” added Harrison of an event still officially known by the ECB as “The New Competition”, although likely to be called “The Hundred”.

He also announced the ECB planned to spend 180 million on The Hundred over the next five years.

Star batsman Kohli, who recently led India to their first Test series win in Australia, regards the five-day game as the summit of international cricket.

“I’m already very…I wouldn’t say frustrated but sometimes it can get very demanding of you when you have to play so much cricket regularly. I feel somewhere the commercial aspect is taking over the real quality of cricket and that hurts me,” Kohli said in an interview with Wisden Cricket Monthly in August last year when asked for his thoughts on The Hundred. (ALSO READ: Once I retire, won’t pick up bat again: Virat Kohli)

“I don’t want to be a testing sort of a cricketer for any new format,” he added.

The ECB’s proposals have provoked a strong reaction from many cricket traditionalists in England who are fearful of the impact it could have on the existing 18 first-class counties.

But Harrison said it was a “myth” The Hundred was designed solely to appeal to people who are not already cricket lovers.

“The new competition is designed to appeal to cricket fans,” he insisted.

“There is room for growth…The competition is designed to do a certain job. We cannot keep relying on the same audience. Cricket can be bigger. Success in five years times will be people saying ‘cricket is a game for me.

Although the names of the eight teams, and the players who will be available, have yet to be confirmed, it is known eight of England’s existing 10 Test match grounds will stage games.

Cricket, still England’s national summer sport, has become increasingly less popular compared to football in recent years. There are fears that it has become socially exclusive, with only some 22 per cent of children exposed to the game at school.

Harrison, who said the ECB’s new strategy was needed to prevent a process of “managing decline,” added: “I want to shed cricket of its tag of ‘elitism and privilege’. They have no place in our future.”

This year, England will stage both the ICC World Cup 2019 and an Ashes Test series against Australia the two biggest events for its men’s team.

Harrison, asked about the importance of England, now in the Caribbean ahead of a Test series against the West Indies, winning what would be a first men’s World Cup title and regaining the Ashes, replied: “Wouldn’t it be great? 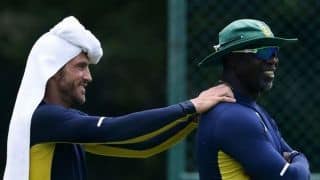