England have finished Day Three on 109 for 4, leading Sri Lanka by 237 runs in third Test at Lord’s. Having dismissed their opponents for 288, the hosts started their second innings with a sizeable lead of 128. With skipper Alastair Cook out through knock on knee, England batting struggled to deal with the Lankan bowlers, especially Nuwan Pradeep. Alex Hales and makeshift opener Nick Compton started off decently with a 45-run partnership. But three wickets in the space of 1.3 overs left them in a spot of bother. Jonny Bairstow and Hales managed to weather the storm and formed a 51-run partnership. But just three overs before the end of the day, Bairstow departed, giving Sri Lanka a ray of hope. LIVE CRICKET SCORECARD: England vs Sri Lanka 2016, 3rd Test at Lord’s

Earlier in the day, England rampaged past the Sri Lankan batting unit in the first session. Starting the day at 162 for 1, the visitors lost five wickets for a mere 40 runs to be left stranded at 202 for 6. With Kusal Perera and Rangana Herath at the crease, it seemed follow-on may be a possibility. But both the players stuck to their task, playing some brilliant shots on the way to a 71-run partnership.

Their stand was broken by Stuart Broad, which triggered collapse as Sri Lanka lost the last three wickets for a mere 15 runs. Chris Woakes and Steven Finn were the chief catalyst for their downfall as both the pacers scalped three wickets, combined with two wickets each from James Anderson and Broad.

England started their second innings without skipper Alastair Cook — who left the pitch for an X-Ray after Herath’s shot struck near his knee. Hales and Compton started off decently, but the latter was soon removed. Soon, two wickets fell in back to back deliveries as Pradeep caused trouble. Bairstow came to the crease and seemed like going for another big score. But a poor shot selection saw his dismissal, bringing in the night watchman Steven Finn. England somehow ended the day without losing another wicket, with Hales, 41, and Finn, 6, at the crease. 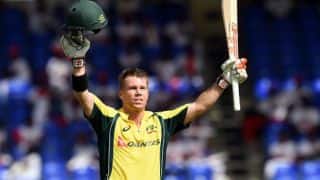