Hello and Welcome to CricketCountry’s coverage of the third Test between England and Sri Lanka, Day 4 at Lord’s.

Hello and Welcome to CricketCountry’s coverage of the third Test between England and Sri Lanka, Day 4 at Lord’s. I am R Narayan and I will be bringing you all the updates from the day’s play. England resume Day 4 of the Test at 109 for 4, with opener Alex Hales and night watchman Steven Finn at the crease. The hosts were rocked by Nuwan Pradeep right at the end of Day as he struck three wickets after Shaminda Eranga had gotten rid of Nick Compton. England captain Alastair Cook did not open the innings as it is believed that he is recovering from the blow to his knee, which he suffered while fielding at silly point. LIVE CRICKET SCORECARD  England vs Sri Lanka 2016, 3rd Test at Lord’s

So that’s it for Today. Sri Lanka need 330 to win this Test and go into the ODI’s on the back of a victory. It will also be one of the greatest ever chases if they get there. IF! England can have a sweet revenge for their 2014 series loss with a whitewash. With rain predicted, the final day will have loads of action. See you tomorrow!

Live Cricket Scores and Updates | Sri Lanka 32/0, 12 overs/ Dimuth Karunaratne 19 , Kaushal Silva 12 | What a beauty from Anderson, just missing the inside edge of the bat and the stumps. Good running between the wickets from the pair. Brilliant shot from Silva for a boundary. That will give him confidence. Another beautiful drive from Silva for a boundary. Woakes comes in as a first change for Anderson, with three overs remaining. What a pull shot from Karunaratne for a four. Moeen Ali comes in to bowl the penultimate over of the day, and gets dispatched for the boundary very first ball. Final over of the day to be bowled by Woakes. And it’s a maiden.

Live Cricket Scores and Updates | Sri Lanka 7/0, 5 overs/ Dimuth Karunaratne 5 , Kaushal Silva 1 | Broad gets underway for the final 12 overs. Can the Sri Lankan openers show the same application they showed in the first innings? Time will tell. First boundary of the innings for Karunaratne. Anderson shares the new ball. Both the batsmen have successfully defended five overs. Seven more to go!

Live Cricket Scores and Updates | England 233/7, 70.2 overs | Alastair Cook 49, Chris Woakes 0 | Woakes is the next man in. Cook survives as a leading edge falls in a safe zone. SIX! A rare sight at view as Cook hits his 11th Test maximum. Cook tries and another scoop (and fails again!). This surely isn’t the Alastair Cook who has 10,000 Test runs. AND ENGLAND DECLARE! Sri Lanka need 362 to win, and will have to face 12 overs today.

Live Cricket Scores and Updates | England 223/6, 70 overs | Alastair Cook 40, Moeen Ali 9 | And we are back underway. England will have declaration in mind, so expect them to go on the attack. Mathews continues on. A lofted shot straight down the ground earns Ali a double. First sign of attacking intent. Eranga is back into the attack. An absolutely unorthodox shot from Cook (he probably watched Sangakkara’s scoop before coming to bat!).

Live Cricket Scores and Updates | England 210/6, 67.2 overs | Alastair Cook 35, Moeen Ali 0 | And they are back out in no time! Good ball from Mathews, just missing the edge of Ali. And Rain’s back. Players go off the pitch again.

Live Cricket Scores and Updates | England 206/6, 65.3 overs | Alastair Cook 32, Moeen Ali 0 | We are back underway. England already have a 330 run lead, so expect them to attack. Mathews will start the final session. Oh, not again. Covers are back on as rain has started.

Live Cricket Scores and Updates | England 202/6, 63.1 overs | Alastair Cook 28, Moeen Ali | Mathews comes into bowl for his fifth over. Having taken a single, Hales has reached his highest score in Test now. A brilliant sweep from Hales, which earns him a boundary which takes him into 90’s. OUT! Hales misses out again on his maiden Test century.

Live Cricket Scores and Updates | England 192/5, 60 overs | Alex Hales 86, Alastair Cook 26 | Herath is gain loads and loads of turn now. Not much happening around now. England are scoring 5-6 runs every over without either batsmen taking any risks. Surely a 100 seems on card for Hales, as he reaches 86

Live Cricket Scores and Updates | England 172/5, 55 overs | Alex Hales 82, Alastair Cook 16 | With 50 overs gone, hosts have managed to increase their lead up to 276. Another 100 runs may just be enough for England. Herath to continue, and concedes five runs from his over. Lakmal is brought back into the attack. Hales steps down the pitch against Herath and plays a beautiful lofted shot straight for a six. And very next delivery, he gets a four from a sweep. Upto 77 now, again closing on his maiden century. From the other end, Cook is timing the ball beautifully. Another boundary for Hales of Herath.

Live Cricket Scores and Updates | England 148/5, 50 overs | Alex Hales 63, Alastair Cook 11 | OUT! But wait, it’s a NO BALL! Pradeep’s ball stays low, so low that Hales is bowled. But umpire rules it a no-ball for overstepping. Unluckily for Sri Lanka, it wasn’t a no-ball. Herath comes in to bowl. Cook survives a scare. After being adjudged out for lbw against Herath. He goes for the review, which shows ball’s impact was outside, hence umpire’s decision is over-ruled.

Live Cricket Scores and Updates | England 132/5, 45 overs | Alex Hales 58, Alastair Cook 5 | Cook is fit and the next to come to the crease with England leading by 249 runs. First boundary for Cook as he plays a brilliant cut shot. Outstanding drive from Hales, which earns him his third boundary of the day.

Live Cricket Scores and Updates | England 120/5, 42.2 overs | Alex Hales 51 | Pradeep to bowl from the other end to Finn. Maiden to start off by Pradeep, who has already taken three wickets this innings. Another boundary for Hales through the slip region. He moves one shy of half-century. Another fifty for Hales, his third this series. OUT! Steven Finn is caught lbw of Eranga’s bowling.

Live Cricket Scores and Updates | England 113/4, 40 overs | Alex Hales 45, Steven Finn 6 | We are back underway after a lengthy delay through rain. Eranga to start of the proceedings. Hales gets the first runs of the day for England, scoring a boundary. Close! A review for lbw against Hales after he was given not out. No luck for the visitors as the decision is umpire’s call. Another good ball from Eranga, who has caused problems to Hales already.

And light drizzle as the covers are back on. Expect some time before a decision is made.

There will be an inspection soon. For the time being, covers have come off.

It’s raining currently at Lord’s, which means there will be a delay in the start.

Sri Lanka batted well in their first innings, but went through a major collapse which meant they were bowled out for 288, thereby conceding a lead of 128 runs. Their openers Dimuth Karunaratne and Kaushal Silva showed great application and cruised to their half-centuries and more importantly showed signs of a good opening pair. England now have a chance to bat Sri Lanka out of the game, but their set batsman Hales will have to get a big score on the board.

With a shadow of doubt over Cook’s participation for the rest of the match, England may have to depend on their lower-order consisting of Moeen Ali and Chris Woakes to come to the party once again. A couple of quick wickets in the first hour could see Sri Lanka bowl England out cheaply and chase down a gettable target to get themselves off the mark on this tour.

Video: When KL Rahul's parents told him cricket not for small town kids and he cited MS Dhoni's example 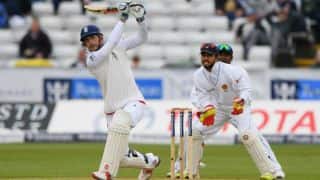