Hello and welcome to CricketCountry’s live cricket blog and updates’ post of the England vs Sri Lanka, third Test at Lord’s, Day 3.

Hello and welcome to CricketCountry’s live cricket blog and updates’ post of the England vs Sri Lanka, third Test at Lord’s, Day 3. Sri Lanka were trailing by as many as 254 runs in the first innings, having put up an inspired batting performance against England at the home of cricket. Kaushal Silva was batting on 79 off 139 balls, accompanied by Kusal Mendis, who was batting on 25 off 54 balls with the help of 3 boundaries. England, in their first innings, managed 416 with their wicketkeeper-batsman Jonny Bairstow notching up yet another big score in this English summer, though his wicketkeeping remained poor behind the wickets. LIVE CRICKET SCORECARD: England vs Sri Lanka 2016, 3rd Test at Lord’s

Live Cricket Scores and Updates | England 109/4, 38 overs | Alex Hales 41, Steven Finn 6 | Finn comes as the night watchman. Sri Lanka have done brilliantly to put England in such a position. Dropped! Hales gets a lucky break as Chandimal drops a tough catch down the leg side. That’s the end of the day. England would be fairly pleased with their display. Despite losing four wickets, they have a lead of 237 in their hands. Sri Lanka won’t be disheartened, considering the bowling display from their stalwarts. We will see you tomorrow for the all important fourth day, considering rain is well and truly on the cards.

Live Cricket Scores and Updates | England 101/4, 35.1 overs | Alex Hales 39 | Both the batsmen are doing a great job of stucking in the crease and not giving it away. Despite pitch assisting pace conditions, both of them have done brilliantly well to deal with the Sri Lankan attack. It seems Bairstow is now stepping up a gear with this boundary. Just few overs left before the end of the day, which has been a good one for the hosts. Nearly caught! Brilliant ball from Herath, which catches the edge of Hales, but falls just short of Mathews at slip. OUT! The in-form Bairstow is bowled by Pradeep for his third wicket.

Live Cricket Scores and Updates | England 71/3, 21 overs | Alex Hales 32, Jonny Bairstow 11 | Bairstow comes at the crease with his side in a spot of bother. He has been the shining light for England throughout the Test series, and will again be looked upon to take them out of this situation. Hales and Bairstow are doing good job of negating the conditions. Both the batsman are confident with their strokeplay. Knowing two more days are still left, both the batsmen are approaching the situation very cautiously.

Live Cricket Scores and Updates | England 50/3, 13.5 overs | Alex Hales 23 | Stand-in skipper Joe Root is the next to arrive at the crease. And he get’s lucky early on, as an inside edge just misses the stumps and goes for a boundary. OUT! Root is dismissed cheaply as the ball stays low. James Vince is the next to come in. And OUT! Pradeep now on a hat trick.

Live Cricket Scores and Updates | England 45/0, 12.1 overs | Alex Hales 23 | Brilliant pull shot from Compton which earns him his third boundary. OUT! Another failure for Compton.

Live Cricket Scores and Updates | England 35/0, 10 overs | Alex Hales 21, Nick Compton 12 | Another brilliant shot from Hales, who gets his third boundary. Fourth boundary for Hales, who is getting runs at good pace. Nuwan Pradeep comes into the attack. Dropped! Karunaratne drops a tough chance at second slip. Hales gets a lifeline. Second boundary of the innings for Compton, who is playing a steady knock.

Live Cricket Scores and Updates | England 17/0, 5 overs | Alex Hales 11, Nick Compton 6 | We are back underway. Nick Compton is promoted to the opening slot, with Cook out for X-Ray. And two back to back boundaries from Hales in the first over of Lakmal. Eranga to share the new ball. Good shot from Compton for a boundary. It will give him loads of confidence.

We will be back underway with England’s batting, who are certain to be without skipper Alastair Cook.

Live Cricket Score and Updates | Sri Lanka 288/9, 94.3 overs | Shaminda Eranga 1 | Lakmal is the next man at the crease. England will look to end it as soon as they can, and take forward a sizeable lead into their innings. Broad finds Eranga’s outside edge, but the ball just falls short of Anderson at third slip. OUT! Lakmal is caught by Root at second slip, giving Anderson his second wicket.

Live Cricket Score and Updates | Sri Lanka 288/8, 92.4 overs | Shaminda Eranga 1 | Eranga is the next man to come in. With Sri Lanka still trailing by 140 runs, the hosts have a chance to amass a big lead going into their second innings. Perera will be the key for the visitors. And he shows no sign of nerves, scoring his sixth boundary. Anderson, somewhat surprisingly has no wickets to his name this innings. Another fearless drive through covers from Perera, only two runs though. Perera doesn’t seem like a player who was out of action for six months, as he gets another boundary. Dropped! A very tough chance let down by Root. OUT! Perera is dismissed after trying a big shot.

Live Cricket Score and Updates | Sri Lanka 276/7, 89.2 overs | Kusal Perera 32 | Back to back boundaries from Herath of Broad’s first two deliveries. Another boundary for Herath of Broad, this time through slips. The last 12 runs have all been scored by Herath, who is showing more than just promise with the bat. OUT! Herath’s innings comes to an end.

Live Cricket Score and Updates | Sri Lanka 25/6, 85 overs | Kusal Perera 32, Rangana Herath 19 | New ball is due, and England have decided to take it. Here’s Anderson. Two loose deliveries from him, not really the start he would have hoped for. Broad to share the new ball, can he do some magic? Perera plays a Jayasuriya-esque shot which earns him a boundary. A wild lash from Herath, as he somewhat luckily gets a boundary for it. Another brilliant straight drive from Perera, who looks in fine touch. Boundary for Herath, which brings their 50-run partnership. Alastair Cook has gone for a X-Ray for blow on his ankle, confirms ECB.

Live Cricket Score and Updates | Sri Lanka 233/6, 80 overs | Kusal Perera 22, Rangana Herath 7 | Moeen Ali to start of the second session. Rain’s around the corner, with spectators already sitting with their umbrella open. Finn to continue from the other end. His first delivery is dispatched for a boundary by Perera. Just an over to go for the new ball. Perera survives a lbw call, as England lose a review.

Live Cricket Score and Updates | Sri Lanka 218/6, 75 overs | Kusal Perera 12, Rangana Herath 2 | Perera comes to the crease, after six months out from suspension. OUT! And Finn gets his third as Thirimanne departs for 17. Rangana Herath is the next to come in, with lunch just around the corner. They still trail by 210 runs. Finn to bowl the last over before Lunch. Good shot from Perera, as he gets his first boundary. Another boundary for Perera as he attempts a big shot just three balls before lunch. It’s Lunch, and England go well on top.

Live Cricket Score and Updates | Sri Lanka 202/5, 70.1 overs |  Lahiru Thirimanne 15 | Both the batsmen are sticking around, without scoring runs. Dropped! Root drops a very tough chance as Chandimal gets his third boundary. A brilliant drive from Thirimanne earns him his first boundary. Moeen Ali gets his chance with the ball, his first for the day. England have been stalled somewhat after an unbelievable first 10 overs, which saw them get three wickets. OUT! Finn has got his second wicket as Chandimal’s review goes in vain.

Live Cricket Score and Updates | Sri Lanka 182/4, 62 overs |  Lahiru Thirimanne 6, Dinesh Chandimal 11| Dinesh Chandimal is the next to come in, and is lucky to get a boundary of his very first ball. Broad and Woakes are bowling beautifully in tandem. Ten overs have been bowled today by England. They have conceded just 13 runs and have taken three wickets. A perfect start! Anderson comes into bowl his first over of the day. Second boundary of the innings for Chandimal. And its Drinks!

Live Cricket Score and Updates | Sri Lanka 169/3, 56.2 overs |  Lahiru Thirimanne 4| Skipper Mathews is the next to come in, with his side in trouble. Another maiden from Broad as England pile up the pressure on visitors. OUT! It’s Mathews this time, as Woakes gets his second.

Live Cricket Score and Updates | Sri Lanka 166/3, 53.1 overs |  Lahiru Thirimanne 4 | Good shot from Thirimanne, but even better fielding from Compton, who saves a certain boundary. A wicket-maiden to start off by Woakes. Play and a miss from Silva, who nearly edges Broad’s delivery. England have sprung back to life today. Back to back maidens for Broad, makes it three in a row by England. First runs of the day, as Thirimanne gets off the mark with a boundary. OUT! Broad removes Silva.

Live Cricket Score and Updates | Sri Lanka 162/2, 50.1 overs | Kaushal Silva 79 | We are back underway at Lord’s for the crucial Day three. Broad to start the proceedings, hoping to improve on yesterday’s display. Very aggressive fielding set up by Cook. Good first over, it’s a maiden. Woakes to bowl from the other end. First ball, and Mendis is gone! Lahiru Thirimanne is the next to come.

Bairstow slammed a brilliant 167 — with the help of a lifeline that he got earlier in his innings — to score a fine 167 not out. Earlier in the series, the right-handed batsman had notched up another big score, signalling his rise as a dependable wicketkeeper-batsman for England in Test cricket. He had a poor time behind the wickets, as he dropped a regulation catch to get rid of Dimuth Karunaratne and also missed out on collecting throws that looked quite simple.

But huge praise should be showered on Sri Lankan batsmen, as they finally got the hang of conditions in England and batted with tremendous command. Sri Lanka opener Karunaratne scored exactly 50, off 101 balls and 7 boundaries. His partner Silva remained unbeaten on 79, eyeing his first century in England. Silva was on 79 not out at stumps on Day 2, having faced 139 balls and striking 10 boundaries. 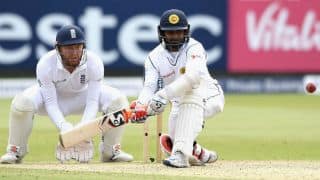