Early tea was taken as match was halted by rain on Day Two.

England lost the wicket of Lauren Winfield just before tea on Day Two, as rain halted the match of the one-off Test at Wormsley. England are 73 for three and have taken a lead of 51 runs. Catch the live blog of the match here.

Despite losing Heather Knight early in the match, Lauren Winfield and Tammy Beaumont were playing well and going strong. However, England Women lost Tammy in the 11th over, as Ekta Bisht trapped her leg-before wicket. Charlotte Edwards was the next batswoman and together with Lauren they extended the lead. Catch the live scorecard of the match here.

However, Shikha Pandey finally provided the break, when she trapped Lauren leg-before. With that the match has witnessed 14 leg-before dismissals, three less than the record. Watch the video highlights of Day One here.

Earlier, India were all out for 114, as Jenny Gunn registered her first five-wicket haul in Test cricket and despite losing Heather Knight early in second innings, Tammy Beaumont and Lauren Winfield quickly took the lead as England women were 30 for the loss of 1 wicket at lunch on Day Two. Jhulan Goswami removed Heather with the second ball of the second innings.

India started the day with Jhulan and Nagarajan Niranjana. The duo put up a partnership of 31 runs for the seventh wicket, before Jenny bowled Jhulan and in the process completed her five-wicket haul. Niranjana, who was looking good, was the next batswoman to depart for 27. A good bowling change from Charlotte Edwards proved costly for India, as the bowler removed settled batswoman Niranjana.

Sonia Odedra picked up her first wicket as she removed Shikha Pandey for a leg-before wicket. India were soon dismissed for 114, with a lead of 22 runs. Earlier, on Day One, India women on Wednesday shot out England for a paltry 92 before the hosts hit back strongly, reducing the visitors to 71 for six in 34 overs on Day One of the one-off Test at Wormsley. 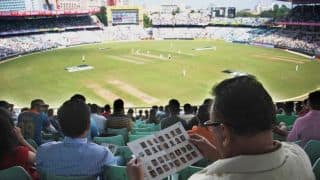 Cricket Association of Bengal to celebrate 150 years of Eden Gardens India vs England 5th Test at The Oval: Rain may play spoilsport