England have finished Day Three of the first Test against West Indies at 116 for three.

England have finished Day Three of the first Test against West Indies at 116 for three. The Test at Antigua is poised firmly in favour of the Englishmen despite a jittery start in their second innings. Their lead has now swelled to 260 and they’ll look to add at least another 100 runs to that total before attempting to bowl out West Indies. Live scorecard: England tour of West Indies 2015, 1st Test at Antigua

The English innings witnessed a torrid start. Alastair Cook and Jonathan Trott were put to the test by Jerome Taylor with some gorgeous display of swing bowling. They failed to come put on top of the test. Cook was dismissed for 11 runs after Trott walked back to the hut for just four runs. Taylor himself picked both the wickets. Live Updates: England tour of West Indies 2015, 1st Test at Antigua Day Three

The star of the first innings Ian Bell was unfortunately run out just when he was getting set. It was then up to Gary Ballance and Joe Root to rebuild and build on a healthy first innings lead and they fared very well. They nurdled the ball around and kept the runs flowing. Root was bit of an aggressor in the partnership. He kept looking for the boundaries and found them with little trouble. Root finished the day at 32*, while Ballance scored 44*. ALSO READ: Jermaine Blackwoood scored maiden Test ton

Earlier, the West Indies innings folded for 295 all out despite a century from the bat of Jermaine Blackwood. Shiv Chanderpaul couldn’t add much to his overnight total and was dismissed by James Tredwell for 46. Tredwell starred with the ball for England as he then went on to pick the wickets of Kemar Roach and Jason Holder.

The West Indian effort with the bat fell quite short off England’s first innings total of 399 conceding a 104-run lead to the visitors. England have the advantage in this Test match after building on that lead in their second innings and the Windies will need to generate a special bowling performance to get their side back in the contest. 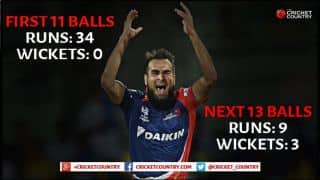 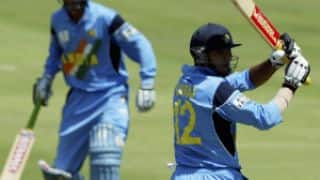