Diwali celebrations came a day early for India as they completed a 5-0 whitewash of England with a crushing 95-run victory in the fifth and final One-day international. 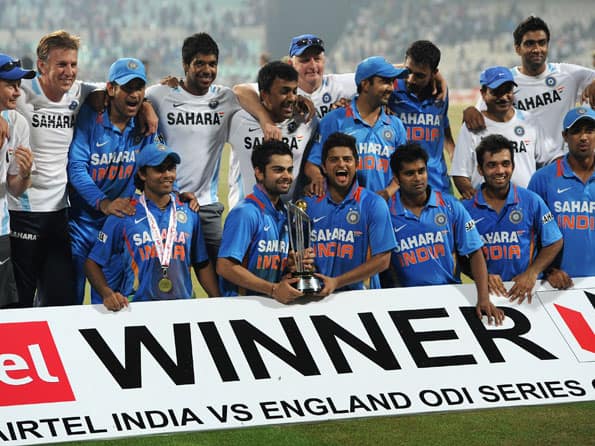 Diwali celebrations came a day early for India as they completed a 5-0 whitewash of England with a crushing 95-run victory in the fifth and final One-day international.

Rookie pacer Varun Aaron provided the breakthrough with a tactical change in line before the Englishmen fell to the Indian spinners’ guile to be bundled out for 176 in 37 overs.

The visitors lost all the 10 wickets with addition of just 47 runs as their weakness against the spinners was exposed once again.

Left-arm orthodox spinner Ravindra Jadeja was the wrecker-in-chief with a superb four for 33, while off-spinner Ravichandran Ashwin claimed three for 21.

Mahendra Singh Dhoni may not like to call it a ‘revenge’, but it’s definitely a redemption time for the world champions who were demolished in England in both the Test and one-day series.

Put into, India struggled to come to terms on a slow Eden Gardens track before skipper Dhoni unleashed himself with another unbeaten knock, this time a 75 not out off just 60 balls, to lift the team to 271 for eight.

Dhoni struck four sixes and three fours during his stay at the crease as India, who were struggling to go past 250 at one point of time, plundered 39 runs in the last two overs.

England bowler Steven Finn took two wickets in an over to put India under pressure but the hosts broke the shackles in the slog overs, with 60 coming in the last five overs thanks to Dhoni’s late outburst.

Dhoni thus remained unbeaten in the series from four innings amassing 212 runs, while Virat Kohli topped the overall charts with 270 runs at an average of 90.00.

In sharp contrast to India’s start, England began their chase on an attacking note that yielded a century stand, their best in the series.

Indian bowlers put up a sorry face up front as both the seamers failed to make any impact.

Cook was at his elegant best, slashing and cutting, while Kieswetter took the charge in a delectable manner.

But lack of consistency and their inability to apply themselves, which has been their undoing in the series, once again came to haunt them.

Dhoni did not do anything magic but a small variation, which saw Aaron bowl from round the wicket, did the trick as the Jharkhand pacer went through Cook’s defence.

Aaron, who had a fine debut with a three-wicket haul in the last match in Mumbai, was introduced late in the 19th over as Cook looked in a belligerent mood against the rookie pacer.

After being pulled over long leg for a boundary by Cook, Aaron had a discussion with Dhoni who may have asked him to change his line, and it did the trick.

After that, England’s frailty against spin was exposed once again as they fell like nine-pins.

In the team’s first outing after winning the World Cup, the stadium, known for its boisterous crowd, responded unusually as it recorded a measly 27,000 turnout, its lowest ever involving the national side.

Just like the dull atmosphere, India had an unexciting start as the new opening duo of Gautam Gambhir and Ajinkya Rahane took time to settle down. (PTI)