England all-rounder Tim Bresnan on Tuesday said that the England team is happy that spinner Graeme Swann is not suffering from injury and would be fit for the first match of the upcoming Ashes series. 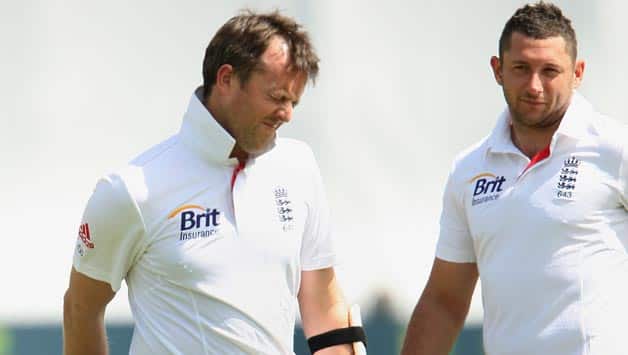 England all-rounder Tim Bresnan on Tuesday said that the England team is happy that spinner Graeme Swann is not suffering from injury and would be fit for the first match of the upcoming Ashes series.

“Injury is part of the game. But obviously you don’t want to be doing it in these sort of matches, trying to prepare for a big series coming up. We’re happy that he’s all right.”

Swann was struck on his bowling arm during the practice match against Essex. However, he continued to bat for nine more overs after getting hurt.

“For a split second I was [concerned], and then I could see he could grip the bat,” Bresnan was quoted as saying by Press Association.

“If he’s got his grip and can move his wrist, it’s generally not broken. It’s just going to be quite sore, but he’ll be all right,” he added.

Talking about the wicket, Bresnan said, “It was weird; it was kind of sticky, just got stuck in the wicket. It’s difficult when the ball gets a bit softer and doesn’t quite get up. You can’t really get underneath it, and I think we found that awkward. Then we just decided to have a flap at it after that.”

Essex bowler Tymal Mills, whose delivery hurt Swann, spoke to the off-spinner after the match.

He said, “Ravi [Bopara] said to bump them, and we were just trying to get off the field really, take some wickets – and that was the way we were going to go about it. At the time, you’re doing what you have to, what your captain is asking. Then when I got off the field, I’ve spoken to him – and he’s all right. There’s no hard feelings.”