Pakistan scored exactly 300 runs in the day's play to finish on 350 for eight at stumps.

Jonny Bairstow was adamant England still had a real fighting chance to win the first Test despite Pakistan ending the second day at Lord’s on Friday in a commanding position.

Pakistan scored exactly 300 runs in the day’s play to finish on 350 for eight at stumps.

That left them already 166 runs ahead of England’s meagre first-innings 184.

Having fallen behind in the game with a sub-standard batting display after England captain Joe Root won the toss on Thursday, the hosts gave Pakistan further encouragement by dropping four catches and missing another clear chance on Friday.

Four Pakistan batsmen, demonstrating a degree of application that has eluded most of their England counterparts, made fifties.

Now it seems only some combination of a greatly improved second-innings batting display and forecast bad weather can prevent England from going 1-0 down in this two-match series.

But England wicketkeeper Bairstow insisted all was far from lost.

We re still definitely in it, he told reporters.

In the middle two innings, if we can gain parity with their score, then we ve got an opportunity to bowl them out for 180 when it’s potentially the worst to bat, in the last.

There’s no reason why we can’t (do that).

And Bairstow said there was nothing to be gained from reflecting too intently on a poor day in the field.

England did take a couple of wickets late in the day, although it was hard to avoid the feeling that these would have little bearing on the outcome of the game.

Those last two wickets at the end (tonight) have put us in with a real fighting chance.

Days three and four are potentially the best time to bat on this wicket. By no means are we out of this game.

Meanwhile Bairstow was unable to explain England’s run of dropped catches, saying: It s not from (lack of) practice, that’s for sure…If you can put your finger on it, you’re welcome to come and join us in practice. You see the hard graft the guys are putting in with the catching.

Bairstow did pay tribute, however, to the way Pakistan scored their runs.

Credit to the way they’ve batted today. They’ve stuck at it well and played with skill, he said.

Experienced opening batsman Azhar Ali laid the foundations for Pakistan’s reply with an innings of exactly 50.

But he warned Pakistan still had work to do if they were to make it two wins from as many Tests at Lord’s following a 75-run success in 2016.

Obviously we’ve got in a good position now — but there’s a long way to go, he said. A Test match win never comes that easy. 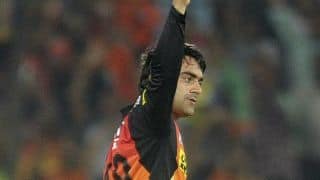