England have lost four wickets and face a monumental task.

England are in trouble as they are chasing 319 to win the second Test against India at Lord’s. They have already lost four wickets and haven’t yet crossed a hundred. The pitch has help for the seamers, but now the spinners are also very effective. There is also some low bounce which is causing the batsmen problems.

Ian Bell was done in by one from Ishant Sharma that stayed quite low. He was beaten due to the lack of bounce and looked quite stunned a he walked out. Alastair Cook, the England captain, who is under considerable pressure, was dismissed by Ishant. The Indian seamer came from round the wicket and Cook flayed his bat at it. The ball took the edge and he was taken by Dhoni. England are now 91 for four and face a monumental task ahead of them. 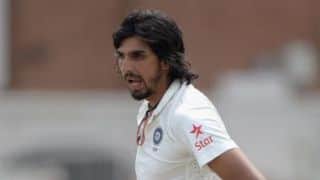