Two days before the commencement of what is billed as the 'revenge series' for India, England wicket-keeper Matt Prior on Tuesday said that the tourists are well prepared for the tough challenge of taming the hosts. 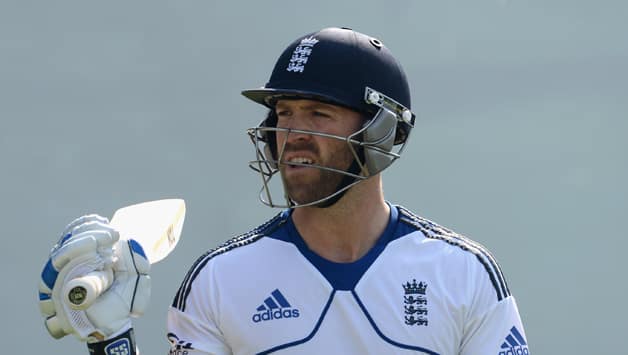 Matt Prior conceded that the 3-0 rout against the Pakistan spin duo of Saeed Ajmal and Abdur Rehman in the United Arab Emirates a few months ago, still rankles the England squad Getty Images

Two days before the commencement of what is billed as the ‘revenge series’ for India, England wicket-keeper Matt Prior on Tuesday said that the tourists are well prepared for the tough challenge of taming the hosts.

“We have given ourselves the best chance, we have prepared as well as we can. It’s now down to performing on the pitch. It’s a tough challenge for all of us,” he said ahead of the opening Test commencing at the Motera here on November 15.

“Coming over here, we had a long preparation. We have been able to play a lot of cricket on these types of wickets.

We are now ready after getting used to the heat, the spinning tracks, the traffic. We are going into the Test match feeling fully prepared,” he declared.

It has been 28 years since any team from Old Blighty had come and bearded India in its own den and Prior said England are well aware of the history.

“It’s always a very challenging place to come and play.

“Cricket is a religion out here and to be able to play in front of people with that mentality is a fantastic opportunity. To come out and win in this environment would be even better. Record speaks for itself how it’s been since England last won over here,” he added.

Incidentally, India were last beaten at home in a Test rubber by Australia in 2004-05 season and since then they have either won the series or drawn them against all other opponents.

Prior conceded that the 3-0 rout against the Pakistan spin duo of Saeed Ajmal and Abdur Rehman in the United Arab Emirates a few months ago, still rankles the England squad.

But the 30-year-old South Africa born stumper also insisted that the team has the ability to move ahead and take on the new challenge head-on as it has a very good batting line-up.

Prior was non-committal when asked about the Test wicket at the Motera Stadium that looked barren.

“My reading of wickets is very poor. We will have to wait and see how the wickets change.

“A lot of times in India you looked at the wicket and felt it’s going to deteriorate and become dust bowls and it plays flat right through. And at other times it looks flat for three days and suddenly ball starts turning and keeping low on the last two days. That’s why we have to keep our mind and options open,” he said.

When the inevitable question on the return to the side of star batsman Kevin Pietersen came up, Prior came out with a straight bat.

“We wouldn’t want KP to change too much because it’s how he is that makes him so special. If KP comes on (as a) shy, introvert character I will be more worried because I want him to go out and express himself like he does.

“You only have to walk round India. These guys who have seen him in IPL can’t wait to see him bat. We certainly can’t either.”

“It’s always in the back of their minds (the debacle against Pakistan). But as an international sportsman you have to move on quickly,” Prior said.

“What I hope we can do is learn from our own experiences, learn from our mistakes and take them forward into these Test matches. Every big batter in our side wants to score big runs in India. We have a very, very good batting team.”

Prior was of the same opinion as his teammate Graeme Swann that the very successful (at home) Indian spin duo of Ravichandran Ashwin and Pragyan Ojha may not be as mystical as their Pakistan counterparts, but were no less bowlers.

“Probably (they are less mystical). (But) It does not make them any less quality bowlers. And we have to prepare as if against any other spin bowlers. We know their quality. We know their knowledge of their own conditions will certainly help. I reiterate the point that we have given ourselves the best opportunity through our preparations out here,” he said.

“We have done a lot of good work. We had a bad experience (against Pakistan in UAE) and we are learning from that. If you have been here (in the subcontinent) before you know what to expect and it does not change really. What is important is how we use the experience to situations, wickets, crowds and everything else (to perform better),” he added.

Duncan Fletcher should have a say in Indian selection process: Rahul Dravid