Pujara was removed by England spinner Moeen Ali, who claimed his third wicket in the game.

India lost their quick wickets in form of Murali Vijay, who was run out for 12, and Cheteshwar Pukara during the chase of 445 against England in the third Test match at Southampton on Wednesday.

Pujara was removed by England spinner Moeen Ali, who claimed his third wicket in the game. India were 29 for two after 12.12overs, with Shikhar Dhawan batting on 11 not out.

England resumed after lunch at 80 for two, with Cook unbeaten on 29 and Ian Bell the new man in. Bell started in aggressive fashion, taking on the left-arm spin of Ravindra Jadeja. Cook too batted positively,slowly but surely batting himself into some form. 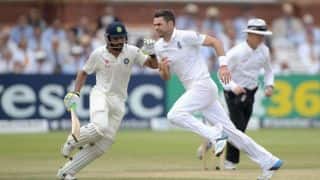