India managed just 29 runs in an hour before declaring their first innings at 326/9, which left them four runs behind England, in a display of bizarre tactics on the fourth day of the fourth and final cricket Test. 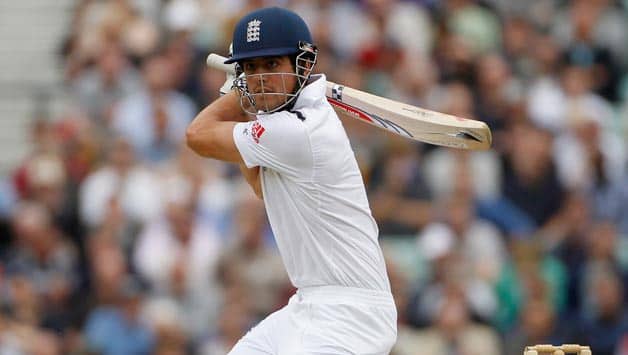 Alastair Cook was unbeaten on one Getty Images

India managed just 29 runs in an hour before declaring their first innings at 326/9, which left them four runs behind England, in a display of bizarre tactics on the fourth day of the fourth and final cricket Test.

The hosts, replying to the visitors’ first innings score of 330 and resuming at the overnight 297 for 8, lost one more wicket — that of no. 10 batsman Ojha for 3 — before applying closure to their innings.

Ojha, who had replaced Piyush Chawla after the latter was dismissed in the last over last evening, played on to left arm spinner Monty Panesar at the score of 317.

In the remaining time to lunch, England made 17 for no loss in 13 overs, to improve their overall advantage over the home team by 21 runs on a track that did not appear to hold any devils.

At lunch, visiting skipper Alastair Cook (1 off 46 balls) and Nick Compton (14 off 33 balls) were the unbeaten men at the crease after 49 minutes of batting.

India, trailing the visitors 1-2 in the series, would have to bowl out England cheaply in the second innings in order to entertain visions of winning the game and squaring the rubber.

England, on the other hand, can play for a draw by defending stoutly against the home team’s bowling attack that lacked penetration in the first innings on a slow wicket of low bounce.

Ojha and Ashwin had resumed this morning as England set out a well-spread out field for the former to take easy singles and give the strike to the lesser recognised batsman.

Ashwin did not take the bait and tried to farm the strike by taking singles off the fifth ball of each over against both Anderson and Swann, who opened the bowling.

It was dull and drab for the Sunday crowd after the drama of yesterday when Virat Kohli (103) and Mahendra Singh Dhoni (99) put on the grand 198-run partnership to stage the Indian fightback from the second day’s score of 87 for 4 before the home team lost four wickets in the last hour’s play.

India added three more runs to the overnight 297 for 8 to reach the 300 mark in the fourth over of the day when Ojha perished to Panesar.

It was the left-arm spinner’s first and, what proved to be the only wicket of the innings in a total stint of 52 overs for 81 runs.

The duo’s ninth wicket stand was worth 20 but it took 60 balls to assume its full potential.

India Skipper applied the declaration, with the home team four runs behind the visitors’ score and after one hour’s play.

Anderson was the most successful bowler with a haul of 4 for 81, three of those claimed on the second evening, while Swann claimed 3 for 76.

India opened the attack with Sharma and Ojha at the two ends against the England openers who hardly looked troubled but preferred to stonewall and play the waiting game rather than go on the offensive.

There was a hint of turn when Ashwin bowled to Compton from round the wicket and the batsman’s attempted drive ended as an edge wide of lone slip Virender Sehwag.

In the last over before the break, Sharma bowled round the wicket to Cook and troubled him with a ball that moved in a bit, but it was missing the leg stump and his appeal was turned down.