Broad named in the 13-man side despite nose injury.

England have named an unchanged squad following their victory at Manchester against India. After being 0-1 down, England have bounced back by winning at Southampton and then at Manchester, giving the visitors no chance of getting back into the game. With one Test to go, England have backed their winning combination and have retained the side that won at Manchester. As a result, Steven Finn holds on to his spot.

England have not kept Simon Kerrigan in the squad though. The Oval may have some help for spin, but Moeen Ali’s encouraging performances in the last two Tests have meant that they would back him to come good. Though Stuart Broad injured himself at Manchester, he has been retained in the side. Alastair Cook, the captain, had said that he wasn’t quite sure about his availability after the last Test. 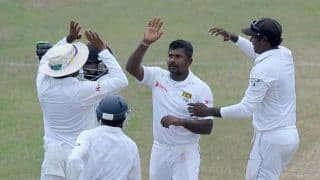