After bowling West Indies out for 168, England further reduced their visitors to 76 for 4 at the end of second session of Day Three after asking them to follow in the Edgbaston Test. England put up unparalleled batting performance as they declared their innings with 514 for 8 on the board. West Indies failed to replicate such impressive batting, falling like dominos in their first innings and handing the hosts a 346-run first innings lead. Following on, West Indies could bring in no change in their batting, losing a total of six of their wickets in a single session, trailing by 270 runs with 6 wickets in hand.

With 145 for 8 on the board, and Jermaine Blackwood unbeaten at 60, West Indies went for lunch. Anderson had picked up 3 wickets in the innings and was joined by rest of his fellow bowlers to bring the underdogs down soon. The only positive in West Indies batting was Blackwood s lone effort which he continued to the second session. He kept on finding gaps, hitting boundaries and playing sensible cricket but barely found any support from the other end. Of the 23 runs West Indies added post lunch, 19 came off Blackwood s bat as his partner Alzarri Joseph and Miguel Cummins departed for 6 and a duck respectively. Unbeaten at 79, Blackwood s commendable effort stood out of an otherwise sorry-looking scorecard. Batting again, West Indies could do nothing unique than their first innings efforts. Kraigg Brathwaite lost his opening partner Kieran Powell soon. It was again James Anderson who drew first blood, producing an edge off Powell s bat. The hope duo, Kyle and Shai, were cleaned up by Toby Roland-Jones and Ben Stokes respectively for contributions which hardly mattered given the mammoth West Indies have to chase.

Brathwaite held on to one end for some time but was removed right before tea was taken. Moeen appealed for an lbw but umpire S Ravi was not impressed. England reviewed the decision to overturn and get rid of Brathwaite for 40. Roston Chase remains unbeaten for 9 at tea. 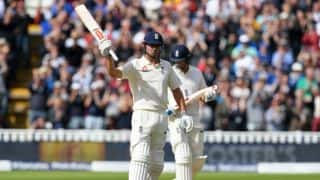