Graeme Swann said Monday that England did not regard themselves as a "dominant force" in world cricket ahead of this season's Ashes series. 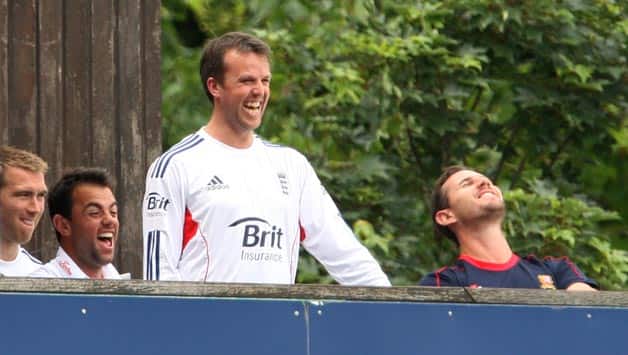 Graeme Swann said Monday that England did not regard themselves as a “dominant force” in world cricket ahead of this season’s Ashes series.

The likes of England great Ian Botham, a thorn in Australia’s side during his 1980s heyday, have forecast a 5-0 series rout for Alastair Cook‘s men and there has even been talk of ’10-0’ for England, should they sweep the Aussies in the return series starting in November.

England, for all that opposition sides — especially Australia — have long enjoyed labelling them as “arrogant”, are making no such claims on their own behalf especially as, having climbed to the top of the Test rankings after a series win over India in 2011, they were knocked off their perch at home to South Africa last year.

“I don’t think we see ourselves as a dominant force,” said Swann.

“We climbed up to number one in the world, which was a feat we aimed to do and we were pleased with, but we didn’t stay there for long so we’re continually aiming to improve,” added England’s premier spinner.

“We want to get back up there and until we are, we won’t see ourselves as a dominant force. I’m sure there are 11 players in our dressing room and 11 in theirs that have been looking forward to this for a very long time. I’ve just been at Trent Bridge, the best Test cricket ground in England, soaking up the sunshine and the pre-Ashes atmosphere is very exciting.”

Swann, known as more of a joker than a sledger, played down suggestions of verbal intimidation by England’s bowlers, although, given how well the teams know each other and how often they are due to meet in the next few months, it would be no surprise if there were some frayed tempers on the field.

“Any altercations we’ve had in the past are firmly in the past,” said Swann, set to be a key member of England’s attack given the number of left-handers, for whom his stock ball turns away from the bat, in Australia’s side.

“You don’t go out there looking to pick a fight or cause a rumpus, you go out there desperately hoping to do well yourself.

“I think any tetchiness may come about because of hot weather or frustrated bowlers, and hopefully that will be on the Australian side as we come in for tea time on day one with 300 for nought,” he jokingly added.