England cricketers rejoiced their "monumental" Test series victory over India here and credited the whole team for the historic triumph after a gap of 28 years. 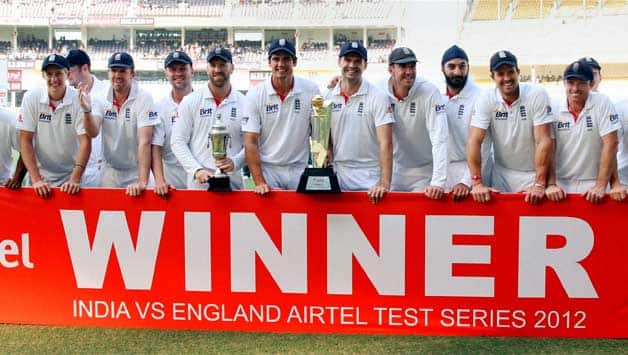 England cricketers rejoiced their “monumental” Test series victory over India here and credited the whole team for the historic triumph after a gap of 28 years.

Almost all the players wrote on their twitter pages to express their feelings after the win.

Matt Prior wrote, “Very proud day! test series win in India…special!!! As I’ve said before..it’s 5pm somewhere in the world! Time to get on it! “

Prior also took a jibe at people, who had predicted that England would suffer a 0-4 whitewash.

“Where’s that tweet predicting 4-0 win to India @MichaelVaughan? The boys can’t seem to find it?,” he wrote.

Paceman Tim Bresnan was happy that he was part of the historic win although he did not play a major role in it.

“That is a monumental win for us. First time in India during my lifetime. Proud to play a small part in it.”

Jonathan Bairstow said he has got some amazing moments from the tour that will remain with him forever.

“A day and tour I shall never forget! Absolutely brilliant!!,’ he tweeted.

Debutant Joe Root, who was at the crease when the stumps were drawn for the final time in the series, wrote, “First test tour, Test debut, first series win…. Doesn’t get any better than this! #comeonengland!.”

Spinner Graeme Swann was also ecstatic. “What a feeling, winning the series and get to see my kids again in the morning. Oh and the wife,” the off-spinner wrote.

Fast bowler James Anderson, who played a crucial role in England’s win, said the party is going to be long tonight.

“A truly amazing all round effort to win out here.

Everyone has been brilliant. Lots of drinking to do now before 4am flight home!”

“Must say how humble and respectful the Indian fans have been in defeat. Appreciate good cricket and admit the better team won,” he wrote.