Ravi Bopara dismissed Suleiman Benn for 1 as England beat West Indies by 18 runs at the MA Chidambaram Stadium in Chennai. 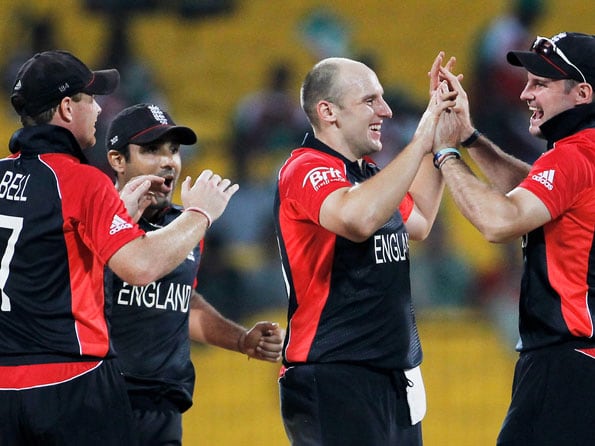 James Tredwell led a magnificent England fightback with three top-order wickets as West Indies lost their way after the early onslaught from Chris Gayle in their World Cup Group B match at the MA Chidambaram Stadium in Chennai.

Tredwell turned the complexion of the game in the seventh over when he pinned Gayle lbw for a hurricane knock of 43, coming off just 21 balls, packed with eight fours and one six.

The wicket not just gave the English fans much to rejoice about but also brought about an extra spring in the stride of the bowler as he went on to account for Devon Smith stumped by Matt Prior for 10 before extracting Darren Bravo for 5 as West Indies slumped to 91 for 3 from a healthy looking 58 for no loss.

West Indies captain Darren Sammy walked in after the fall of Gayle s wicket and did not waste much time in throwing caution to the wind with a blistering 29-ball 41. He clunked Tim Bresnan for two boundaries before taking the aerial route against the bowling off Tredwell, banging him for three sixes.

Soon Sammy was bowled by Ravi Bopara the bowler soon had his second victim cleaning up Devon Thomas for 10.

Earlier, Gayle entertained the Chennai crowd with some breathtaking strokeplay. The left-hander, who missed the last game against Ireland because of an injury, singled out Bresnan for punishment, clobbering him for four boundaries in one over before showering the same treatment to Chris Tremlett, collecting eighteen in one over to give the West Indies the early advantage.