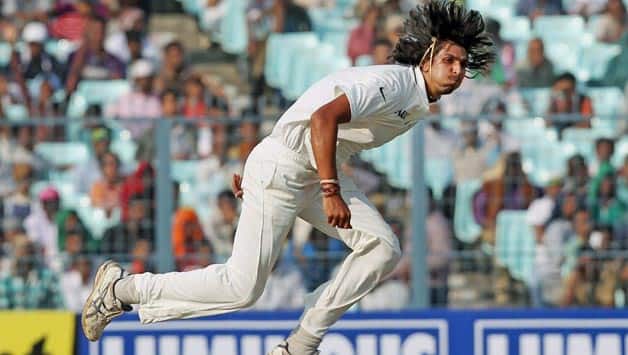 Sharma sent back Compton for 3 to leave England 3 for one and then trapped the in-form Cook leg before for 1 to leave the visitors gasping at 16 for 2 in the 11th over.

Jonathan Trott and and Kevin Pietersen, both on 28 and with four fours each, played aggressively to steady the rocking boat and take the visitors to lunch at 61 on a pitch displaying some uneven bounce.

Sharma, who had picked up one wicket in the second Test at Kolkata lost by India to trail by 1-2, bowled with good rhythm to rattle the visiting team after Cook won the toss for the first time in the series and promptly opted to bat first on the dry VCA Stadium track sporting some cracks.

India, who chose to go in with only one fast bowler in Sharma to accommodate the third regular spinner leggie Piyush Chawla, made England struggle for runs with the gangling Delhi pacer, at last showing some aggression in the rubber.

Sharma, who was unwell before the first Test at Ahmedabad and was not picked for the second Test in Mumbai as India went in with three frontline spinners, was not averse to digging the ball in short.

And it was a short, wide ball that accounted for Compton who nervously prodded at it and edged to wicketkeeper MS Dhoni.

It was only the third time that India had managed to break the opening stand between Compton and Cook below 30 and the second successive time in single figures after the second innings in Kolkata.

Trott, lucky not to be given out leg before off Sharma by umpire Kumar Dharmasena, started off with a flowing straight drive off Pragyan Ojha who started the bowling attack with Sharma.

Trott survived the leg before appeal when he was struck in line with the off stump when on 6 and the batsmen ran a leg bye to long on.

Ojha, India’s most successful bowler in the rubber, was guilty of straying down the leg side and was consequently swept by Trott for fours but had an economical first spell of 10-4-14-0.

India got rid off the thorn in their flesh right through the series, Cook, through a dubious umpiring decision by Dharmasena.

The England captain was declared out trapped in front by Sharma but replays showed he was hit outside the line and the ball was not doing enough bending inwards to have struck the stumps.

Sharma’s fine first spell read 6-2-18-2 but his replacement, debutant Ravindra Jadeja, bowled a few loose balls initially and was struck for fours by Kevin Pietersen and Trott on either side of the drinks break.

Chawla, who was picked for his third Test despite a very moderate run in domestic cricket, was smacked for two lofted fours by Trott in his first over after he replaced the unsuccessful Jadeja.

England reached their 50 in 95 minutes but at a moderate rate of just over 2 per over.

Sharma troubled Trott in the second spell but the batsman stayed put.

England made two changes to the eleven that defeated India by seven wickets in the previous game at the Eden Gardens in Kolkata by bringing in Joe Root, for his debut match, and Tim Bresnan for Samit Patel and the injured Steven Finn.

India made one change by bringing in debutant Ravindra Jadeja and leg spinner Piyush Chawla in place of Yuvraj Singh and Zaheer Khan who both played at Kolkata before being axed from the 15 for this Test.

MS Dhoni finally gets what he wants!