Australia’s middle and lower-order combined to guide them to 217 for nine in the fifth and final One-Day International (ODI) against England at the Adelaide Oval on January 26, 2014. Most of Australia’s top-order were dismissed cheaply by the England bowlers.

George Bailey top-scored with 56 off 74 deliveries for Australia. Stuart Broad and Ben Stokes took three wickets each. England trail the five-match ODI series 3-1 and would require 218 runs to get two wins in-a-row.

Michael Clarke returned to captain Australia after having been rested for the fourth ODI in Perth. Australia made four changes from the previous match as Clarke, Shane Watson, Xavier Doherty and Clint McKay replaced Dan Christian, Mitchell Johnson, James Pattinson and Steven Smith.

England made only one change as Joe Root came in for Gary Balance. The England bowlers began well as they got three early wickets. In-form Aaron Finch was bowled for seven by Broad in the fifth over. Watson (0) then edged one to wicketkeeper Jos Buttler to give Broad his second wicket.

Things became more difficult for Australia as captain Clarke was bowled by Tim Bresnan for eight in the 14th over. Shaun Marsh then fell for 36 to Stokes. Bailey and Glenn Maxwell then added 48 runs for the fifth wicket.

Maxwell was dismissed for 22 by Stokes as he edged one to Buttler. Wicketkeeper Matthew Wade also provided support and together with Bailey added 55 runs for the sixth wicket. Bailey went onto to score his 12th half-century. He struck four fours in his innings before he was dismissed by Stokes for 56.

Wade soon followed as he was bowled for 31 by Broad. James Faulkner then scored a run-a-ball 27 before being dismissed by Chris Jordan in the last over of the innings. Nathan Coulter-Nile fell next ball for 15. Jordan, though, could not complete his hat-trick as Doherty got a single.

In the end, Australia had managed to reach 217 for the loss of nine wickets. 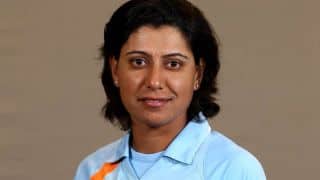