Wet outfield at Old Trafford meant a delayed start to the first ODI between England and West Indies. After several inspections, umpires reduced the contest to 42 overs per side. Jason Holder opted to bat, but West Indies never got going. Managing 204 for 9 in 42 overs, visitors have a daunting task to restrict England. Chris Gayle, Shai Hope, Rovman Powell got starts, but failed to hold their ends for long. From England, Ben Stokes, Adil Rashid and Chris Woakes led the wicket column.

West Indies had started well. Gayle lashed onto anything offering width or in the fuller-length region. He lost his opening partner Evin Lewis for 11 in the 6th over. Moeen Ali was introduced to produce a breakthrough, and responded with what was asked of him. Lewis pulled well but was caught by the square-leg fielder; Gayle followed suit. He was dropped in the first over by Joe Root, and the winsome Englishman was aware of his folly. He made up for it with a brilliant catch while running to get rid of the Gayle-storm.

West Indies never got going thereafter. Samuels, Powell, Hope and Jason Mohammad got into the groove but failed to capitalise. The Samuels-Stokes rivalry was highly awaited, and the battle was won by the latter in the 26th over. He dismissed Samuels, getting a thick edge off a flick. A cameo from Holder enabled West Indies to 204 for 9, courtesy a scratchy last over from Stokes.

Woakes got the big fish in Gayle, whereas Adil Rashid kept it tight from his end. 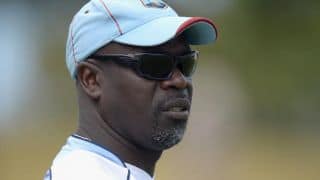 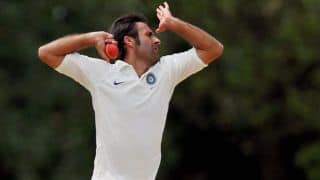