England's bowlers struggled in an underwhelming start to their Ashes 2013-14 tour in the opening match against a Western Australia Chairman's XI in Perth on Thursday. 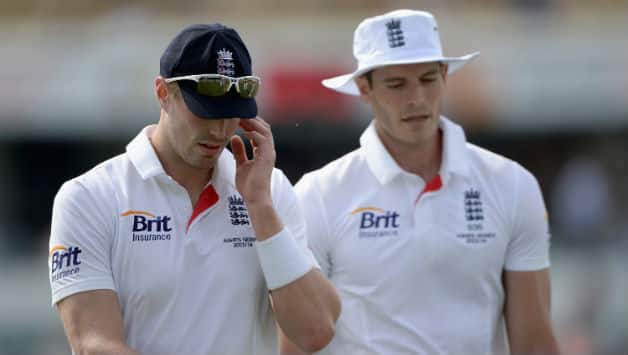 England‘s bowlers struggled in an underwhelming start to their Ashes 2013-14 tour in the opening match against a Western Australia Chairman’s XI in Perth on Thursday.

The home side, effectively a second-string outfit comprising fringe First-Class players with the main state team involved in a domestic Sheffield Shield game, won the toss and chose to bat in the three-day match, reaching 369 for four off 90 overs at the close against a tepid English pace attack.

While England paceman Chris Tremlett, who went wicket-less, conceded it was a disappointing day with the ball on an unresponsive pitch, he said there was no cause for concern in the English camp.

“There is no need for panic,” Tremlett said. “It is the first day, which is the hardest, and it was a massive jump in workload for all of us.

“The most we have bowled in a day is four or five overs for the last week. I think we can take something out of today (Thursday), we all had some good spells at times.

“The main thing is getting the miles in the legs, it is a positive with the guys getting through 17 or 18 overs each.”

The tour opener was slated as a bowl-off for England’s pacemen, with tall quicks Tremlett, Boyd Rankin and Steven Finn all hoping to push their case for a spot in the first Test team against Australia, starting at the Gabba in Brisbane on November 21.

However, none of the trio impressed with the ball, rarely causing the Chairman’s XI batsmen any discomfort for most of the day.

Rankin, whose first spell featured a succession of wayward full tosses, was the only one of the three to claim a wicket, removing centurion Chris Lynn late in the day.

Tremlett (none for 71) and Finn (none for 87) took eight and five wickets respectively at the same venue in England’s most recent Test in Perth in 2010.

Tremlett said the trio weren’t distracted by worrying about their Test prospects.

Veteran seamer James Anderson was clearly the best of the frontline bowlers with one for 31 off 16 overs, while part-timers Ben Stokes and Joe Root each picked up a wicket.

To make matters worse for the English, they put down two catches, while a third chance didn’t even go to hand when Stokes lost the ball in the sun later in the day.

Queensland’s Lynn, who was invited to play for the Chairman’s side, was dropped by Tremlett at mid-on on 66 and went on to make 104, while Marsh (58) was put down by Root at first slip when he was on just six.

Anderson was the only English quick to pick up a wicket in the day’s first two sessions, when he had opener Marcus Harris caught in gully by Ian Bell for 69, after fending off a rising delivery.

That ended a 115-run opening stand, with all of the WA batsmen dismissed making half-centuries.

England were missing several key players for the opening match, including captain Alastair Cook, who has a sore back, and Kevin Pietersen, who was a late arrival in Australia. Fast bowler Stuart Broad and off-spinner Graeme Swann were rested.

Wicketkeeper Matt Prior is leading the England team in Cook’s absence.