England on Monday broke a 28-year-old jinx by achieving a historic Test series win on Indian soil, leaving the hosts embarrassed with a 2-1 verdict in their favour after the fourth and final match ended in a draw. 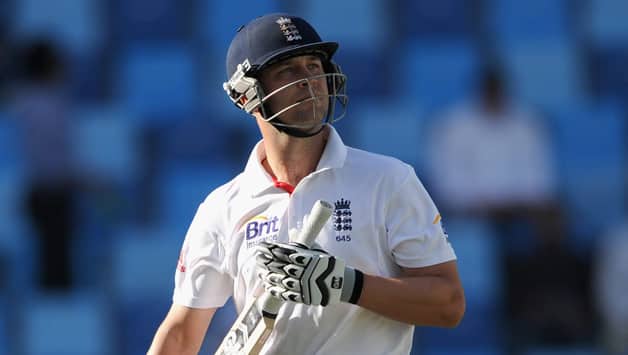 England on Monday broke a 28-year-old jinx by achieving a historic Test series win on Indian soil, leaving the hosts embarrassed with a 2-1 verdict in their favour after the fourth and final match ended in a draw.

The last time an English side had defeated India in their own den was way back in 1984-85, under the captaincy of David Gower.

The day belonged to centurions Jonathan Trott (147) and Ian Bell‘s unbeaten 116 even as the story remained the same for a hapless India who toiled without much success before the match was called off on the final day with England scoring 352 for four.

The hosts needed to take quick wickets to entertain hopes of a win but that did not happen as Trott and Bell batted off the first session to ensure the series triumph for the hosts.

The English players broke into wild celebrations the moment the two sides mutually agreed to a draw at the Green Park stadium. There was a feeling of bonhomie and the tourists hugged each other even as gloom descended on the Indian dressing room.

Bell and debutant Joe Root (20) were at the crease when the stumps were drawn for the final time in the series.

It was a remarkable turnaround from the visitors after the humiliating defeat in the series opener in Ahmedabad a month ago.

England staged a strong comeback in the next match in Mumbai where the hosts were crushed by 10 wickets, and the script was pretty similar in Kolkata — the venue for the third Test — where the visitors cruised to a seven-wicket victory at the Eden Gardens.

This is also the first time in the last eight years that India have suffered a Test series defeat at home. Australia beat India 2-1 in 2004-05.

Man of the Series: Alastair Cook

Shane Watson in line as skipper if Michael Clarke ruled out