India's skipper Mahendra Singh Dhoni feels the bowling attack, which let him down in the one-day series in England, should deliver at home when the two teams begin their five-match series on Friday. 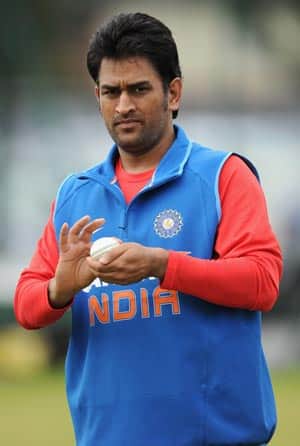 India’s skipper Mahendra Singh Dhoni feels the bowling attack, which let him down in the one-day series in England, should deliver at home when the two teams begin their five-match series on Friday.

The attack will be led by medium-pacer Praveen Kumar in the absence of injured Zaheer Khan and spinner Harbhajan Singh, who was dropped. Kumar will be assisted by the likes of offspinner Ravichandran Ashwin, medium-pacers Vinay Kumar, Umesh Yadav, and uncapped Varun Aaron and Sreenath Aravind and leggie Rahul Sharma.

Dhoni sees it as a great opportunity for the fresh-looking bowling line-up in familiar conditions.

“This is a different set of bowlers and they all will get an opportunity to perform in home conditions. That is a big plus point for them, they know the conditions well and most of them have the experience of playing in the Indian Premier League. So they have a fair idea as to what needs to be done when a batsman is going after them. I think it will be quite exciting,” said Dhoni on the eve of the first One-day International here at the Rajiv Gandhi international stadium at Uppal.

“Another opportunity for the batsmen to set themselves up at the top level in the absence of key players. It is exciting to see some of the youngsters the way they approached the game,” said Dhoni.

The new rules including the use of two new balls per innings and abolition of a runner will be implemented in the series and Dhoni thinks the new playing conditions will lead to strategic changes.

On playing in India, Dhoni said: “Of course, it is good to be back in India and playing. We had a fair amount of challenges when we were in England with top players missing due to injuries. This series will be an opportunity, especially for bowlers, to have a good look at international cricket and show their talent.”

Asked whether Suresh Raina would be under pressure to perform, Dhoni said it would be a big opportunity for him, not pressure.

“It is an opportunity for him. He has been my colleague for the past four years in the Chennai Super Kings team also. He loves challenges, loves bowling in first power play or second power play irrespective of whether the batsman is going after the bowling or not. It is good to have characters like him. It is another opportunity, not pressure.”

On the team composition, the captain said Parthiv Patel and Ajinkya Rahane were impressive as openers in England, but with Gambhir back in the mix, he hinted a shuffle in the order.

“We have not yet finalised the eleven. Parthiv and Rahane did really well in England. Gautam has batted for us at number three quite a few times. Of course, when Sachin or Veeru (Sehwag) were not there he opened the innings. But we need to analayse whether we want him to bat at the top or in the middle order,” said Dhoni.

About the pitch, Dhoni said the relaid wicket looks different from the usual Hyderabad track. He does not think it will be as flat as the tracks on which he had played before.

“It is a relaid wicket. It looks different from a normal Hyderabad wicket. It does not appear as flat a track as we have played on. But we will know how it exactly looks and plays only tomoroow and so we will decide on the eleven only before the start of the match.”

On India’s record of not having won a game here, Dhoni said these stats would not bother him much. “Let’s hope this will be Hyderabad’s first win.” (IANS)