Sri Lanka were restricted to 255 and England chased it down with ease keeping all wickets in hand in 2nd ODI at Edgbaston, Birmingham.

England comfortably achieved their first win in ODI series against Sri Lanka with highest ODI partnership of 256 on Friday that stands fifth as compared to the partnerships achieved between Sanath Jayasuriya and Upul Tharanga (286), Tillakaratne Dilshan and Upul Tharanga (282), Brendon McCullum and James Marshall (274), Sourav Ganguly and Sachin Tendulkar (258). Sri Lanka tried various combinations and efforts for the unstoppable to happen, yet England found out their way to emerge as winners. This is not the first instance that any team has won the game with 10 wickets on hand. There have been several teams who have achieved this feat earlier as well. Full Cricket Scorecard: England vs Sri Lanka 2016, 2nd ODI at Edgbaston

India have achieved this feat twice — against New Zealand at their home ground and against Zimbabwe at Sharjah when Sachin Tendulkar scored his unbeaten knock of 124. Similarly, this is not the first time England have won a game with all wickets on hand. In 2005, England won against Bangladesh at their home ground with a target of 192. West Indies are also another contender in this list achieving this mark thrice — against Pakistan at Melbourne, beating India at Bridgetown and lastly against New Zealand at Christchurch.

Alex Hales and Jason Roy achieved their tons one after the other, with Hales securing his 3rd ODI century and Roy his 2nd. Hales also secured his 1,000 ODI runs in the process. Both the batsman played with grit and were in complete command of the game, leaving no scope for Sri Lanka to achieve any wicket. The first match was a thrilling tie between these teams and this time it was a one team show.

There are three more ODI series against Sri Lanka and the visitors will hope to avenge this defeat in the upcoming matches. 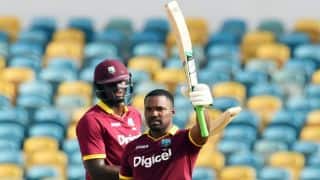 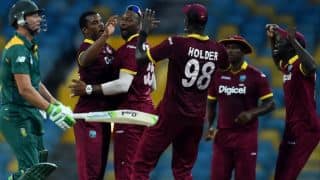