No need to panic after one Test loss: Andy Flower

No need to panic after one Test loss: Andy Flower

England coach Andy Flower said on Tuesday that he was confident England could come back strongly in the second Test against South Africa at Headingley after their innings defeat in the first Test at the Oval last week. 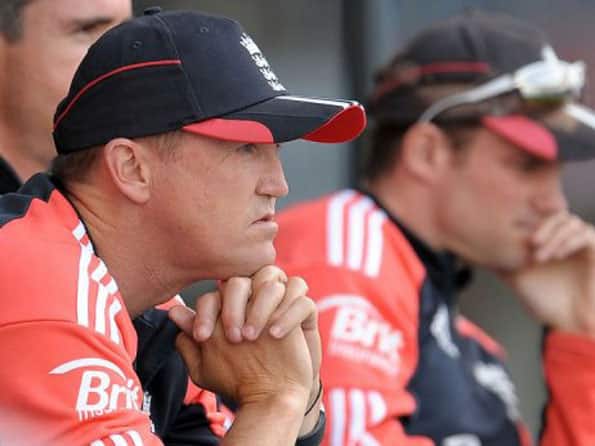 England coach Andy Flower said on Tuesday that he was confident England could come back strongly in the second Test against South Africa at Headingley after their innings defeat in the first Test at the Oval last week.

“They outplayed us,” said Flower about the South African performance, which saw them make 637 for two declared in their only innings, inspired by an unbeaten triple century from Hashim Amla.

“They played outstanding cricket. We fought hard but we weren’t good enough. We get another opportunity on Thursday.”

Asked how England could recover after a comprehensive defeat, Flower said: “We get ourselves into the right frame of mind by doing the things that we have been doing very well for the last couple of years.”

“I have every confidence in our players that we can come back and play good cricket.”

“Part of our make-up has to be to deal with those ups and downs,” added Flower, in an admission that big swings in fortune were part and parcel of international sport.

He said the momentum in the first Test changed when England failed to capitalise on a good start in the first innings, as they collapsed from 251 for three to 385 all out.

“On a pitch like that you need a significant score and after some outstanding performances on the first day we didn’t capitalise and the South Africans bowled well that second morning,” he continued.

England have won four and lost five of their last ten Tests, but Flower rejected comments that their performances had been “dismal” since they claimed the number one Test ranking.

“We have had some really good results over the last couple of years,” he said.

“You’ve got to look a little deeper than that. The series (against Pakistan) in the United Arab Emirates was played under specific conditions and we struggled against their two spinners.

“You can’t compare that at all to the first Test against South Africa.”

He denied that England’s confidence had taken a knock because of the way they lost the first Test and said his team’s preparation remained methodical.

“We try to make every Test special. We practiced hard this afternoon. Each individual has his own methods of preparation and we do certain things as a team that have stood us in good stead in the past,” he said.

“After one Test loss you don’t throw your methods out of the window.

“We’ve got a group that is very confident and quite rightly so.

“Sometimes you are outplayed regardless of the attempts at dismissal or the strategy that you implement and you have to give credit to the opposition.

“It’s very easy after a loss, especially a heavy loss, to attribute it to any number of things.”

Flower added that Ravi Bopara’s withdrawal for personal reasons was disappointing for the player but said it did not close the door on his chances for future selection.

But Bopara’s replacement, James Taylor of Nottinghamshire, now has a chance to prove himself.

“I don’t know James very well,” said Flower. “We had him down to the odd net with us. I’ve seen him working with (England batting coach) Graham Gooch.

“I watched him play against Sri Lanka last year at Derby and he played very well. He looks like a young man who understands his game very well and he knows how to score runs in his way.”(AFP)

Daniel Vettori ruled out of second Test against West Indies