England bowled out New Zealand for 350 and have batted well since then and are 54 for 0 at Lunch on Day Two of 2nd Test at Headingley.

England head into Lunch on Day Two on top against New Zealand in the 2nd Test at Headingley. Both the openers played out the session without any worries and will be eying a big score as the Kiwis continue to struggle for wickets. Alastair Cook is just five runs away from being the highest Test run-scorer for England, surpassing Graham Gooch‘s tally of 8900 Test runs. He has particularly left the ball well and looks to be in good touch. They are 54 for zero and will looking to get going after the Lunch interval.

England bowled out New Zealand for a score of 350 after New Zealand scored as many as 53 runs in the 7.1 overs bowled on Day Two. Matt Henry, Mark Craig and Trent Boult as threw their bats around to ensure the Kiwis got to that total. Stuart Broad was the pick of the bowlers taking his 13th five-wicket haul in Tests. Live Updates:England vs New Zealand, 2nd Test at Headingley, Day 2

New Zealand had got to the score thanks to two brilliant and contrasting half-centuries from Tom Latham and Luke Ronchi. The Kiwis continued their aggression and it probably got the better of the two batsmen who missed out on their tons; Latham was out on 84 while Ronchi hit one down to fine leg to get out on 88. But they had done enough to defy the English bowlers who bowled well after rain washed out the first session on Day One. Scorecard:England vs New Zealand, 2nd Test at Headingley

Earlier, England won the toss on Day One and inserted New Zealand into bat. They were unchanged. New Zealand replaced the injured Corey Anderson with Luke Ronchi. 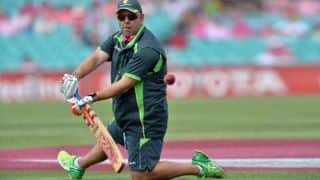 Australia playing XI against West Indies to be a late call by selectors, says Darren Lehmann