England's thrashing at Perth was their 18th defeat from 23 Tests in Australia this century. On the other hand, Australia have been on the doorstep of defeat in 11 of 25 Tests in England.

England’s thrashing at Perth was their 18th defeat in 23 Tests in Australia this century. On the other hand, Australia have been on the doorstep of defeat in 11 of 25 Tests in England. Australia’s loss percentage of 44 is by all means better than England‘s 78, proving that the Englishmen have been poor visitors Down Under.

This does not surprise Michael Vaughan. “This isn’t the first England team to come here and struggle. It’s just been a common trend when England come to Australia,” Vaughan told BBC.

In the previous Ashes in Australia, England had faced a 0-5 drubbing. Graeme Swann and Jonathan Trott had retired during the series, citing stress. Kevin Pietersen, the highest run-scorer in the series, did not play a Test since.

After winning the 2005-06 Ashes at home, England were whitewashed in the next edition in Australia. Vaughan is right about the trend: “Apart from that one series (in 2010-11), and the England side back then were very, very good but they weren’t that good or better than any other England side. It’s just that they came up against an Australian team that wasn’t quite what we’re seeing now. But it’s nothing to be surprised by. This has happened too consistently in the 21st century.” 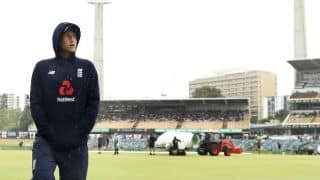