In a session that saw England hit back, India were reduced to 140 for six. On a green surface in the morning session, India did very well to fight it out and finish on 73 for two. However, India kept losing wickets and it was a disastrous afternoon session for them.

Commencing after lunch, India lost Virat Kohli as he edged James Anderson to the wicketkeeper for 25. Cheteshwar Pujara continued to play with his typical grit and fight. He was patient and picked the occasional opportunity to take the runs. He was moving along well until Ben Stokes got through him with one that came in. It was a good surprise delivery as Stokes had been bowling the outswingers.

However, skipper MS Dhoni was uncomfortable and his 17-ball stay for a single was done when he was caught behind off Stuart Broad. Ravindra Jadeja walked in to some jeers, and he too didn’t last long as he was trapped leg-before by Moeen Ali for three. India found themselves in tatters at tea and now Rahane and the star of the previous game, Stuart Binny are left with a monumental task. 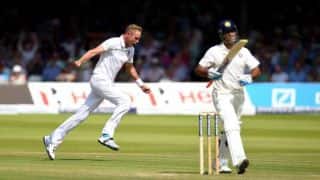 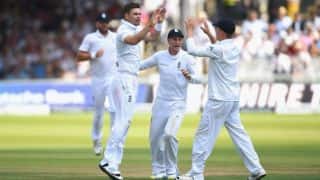